Zipcar will be bought by Avis, CEO says 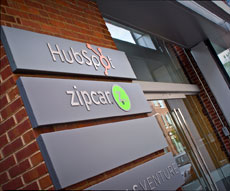 Zipcar will be bought by Avis, CEO says

Zipcar, founded and based in Cambridge, will be bought by Avis and move from its Kendall Square offices to Boston, the company has said. (Photo: Ed O’Connor)

The Zipcar by-the-hour car-rental company has entered into an agreement to be acquired by traditional car renter Avis Budget Group in a $500 million deal, Chairman and Chief Executive Scott Griffith said Wednesday in an e-mail to members.

“This is a major win for Zipsters around the world. With the global footprint, backing and talented leadership of Avis, we’re going to step on the gas,” he said. “We believe that you’ll see more Zipcars in more locations” as well as new service offerings that make Zipcar more flexible.

The company’s 496 employees will still be moving this year to Boston’s Innovation District from 25 First St., the company said.

Avis would be paying $12.25 per share in cash, a 49 percent premium over the closing price of company shares as of Dec. 31, according to a company press release. The transaction is subject to approval by Zipcar shareholders and other customary closing conditions, and is expected to be completed in the spring. Still, each companies’ board of directors approved the transaction unanimously, and shareholders representing about 32 percent of the outstanding common stock said they would vote their shares in approval, the company said.

The company, founded in Cambridge in 2000, had once been valued at $1.2 billion. It has more than 760,000 members and 10,000 vehicles in urban areas and college campuses throughout the United States, Canada, the United Kingdom, Spain and Austria.

Avis has 10,000 rental locations in approximately 175 countries around the world, mainly in North America, Europe and Australia directly and through licensees in other parts of the world. It has 29,000 employees and is based in Parsippany, N.J.

“We see car sharing as highly complementary to traditional car rental, with rapid growth potential and representing a scalable opportunity for us as a combined company. We expect to apply Avis Budget’s experience and efficiencies of fleet management [and] leverage Zipcar’s technology to expand mobility solutions under the Avis and Budget brands,” said Ronald L. Nelson, Avis’ chairman and chief executive.