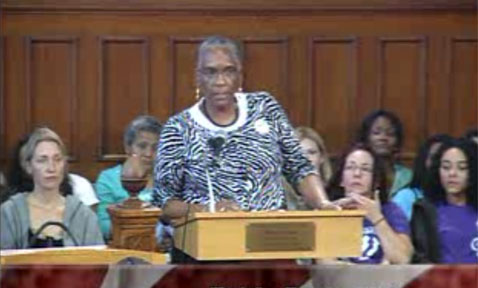 Evette Layne, director of the MIT/Wellesley Upward Bound program, speaks to the City Council for the first time Sept. 10 in a screen capture from council video.

With the doors closing on the Upward Bound program in less than two months, its director, students and supporters spoke Monday to win the help of city councillors, which it got unanimously. But it was a replay of a scene Sept. 10, when people involved with the program first spoke before the council about the loss of $400,000 in state funding that would cause it to close – something that was then nearly six months away.

“They stated their support again, but what does it mean?” said Evette Layne, director of the program, on her way out of the council meeting.

Upward Bound helps some 75 low-income Cambridge Rindge & Latin School students each year get to and through college, boasting a 90 percent success rate. It costs about $600,000 a year to run the program, with the Massachusetts Institute of Technology – where the program’s offices are – and Wellesley University – where the kids go each summer to experience campus life – making up the remaining $200,000 in expenses. With the end of two decades of federal funding in August, the universities stepped up temporarily to keep the 47-year-old program running through February.

“This program has not only helped me realize my academic potential, it has given me a second family. I have seen the program turn girls into sisters, boys into brothers, men and women into leaders. I have watched a shy guy who stood in the back stand up and take responsibility for the program,” student Richard Kieser told the council. “The thought of this program not being here breaks my heart … Today I got my first acceptance letter to college, and the first thing I did when I got off the phone was run to tell my U.B. mothers.”

Between the Sept. 10 meeting and Monday, there was yet another expression of support from the council: a Sept. 24 meeting in which the council voted to have one of its committees look at taking money given to the city by the pharmaceuticals company Novartis for a building project and use it to keep Upward Bound running. The money could go “all or in part” to the program to give it “an additional year to seek outside funding,” according to the council order.

But the topic didn’t appear on the agenda for the Oct. 19 meeting of councillor David Maher’s Government Operations and Rules Committee and wasn’t mentioned during it. When Maher explained his report to the council Nov. 19, Upward Bound again wasn’t mentioned.

The Upward Bound group has met with City Manager Robert W. Healy twice since the September meetings, but they were mainly question-and-answer sessions without resolution, Layne said. The city manager wants to find the organization another source of grant funding, councillor Ken Reeves said after the meetings, and he has sent a letter to the U.S. Department of Education suggesting that the program lost its funding only because it was evaluated incorrectly.

If Healy can find other funding for the program, he would be more comfortable offering Upward Bound some “bridge” funding to hold it until the new money becomes available, Reeves said.

Healy is known to oppose the city picking up funding for programs when grants run out.

“I expect the manager will get to them soon to tell them something definitive,” Reeves said.

Still, Reeves made it a point Monday to ask Healy to sit and listen to councillors talk about their support for the program, even though Healy had no other role at the meeting; it was one of the rare meetings in which his agenda, this time only three items, was accepted without discussion. The council order was, once again, a request for the city manager to work with the program to find a solution.

Councillors have also asked for Superintendent Jeffrey Young and the school district to be involved in finding a solution for Upward Bound. In addition to bridge funding and the possibility of pressuring MIT to help even more, councillor Marjorie Decker wondered if Upward Bound could be absorbed completely by the schools department, and Reeves agreed the department “had a role to play.”

“We need to be inventing solutions,” Reeves said. “This is too serious, because too many people are falling through the cracks.”

It was similar to something he said at Upward Bound’s first council appearance in September: “This is a do-or-die moment.”

“Our hopes were lifted on Sept. 10 when we came before this body to request financial assistance,” Layne said. “We were further encouraged by additional conversations and meetings with the council Sept. 24 and with city manager Healy and councillors Reeves and [Denise] Simmons. But we find ourselves before you again because the end of the program is near. The reality is we need help from the city now.”