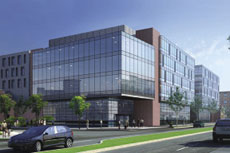 Construction for Biogen Idec proposed for the Alexandria complex could be relieved of the need to have a ground-floor cafeteria. (Image: Nerej)

The pretense that Biogen Idec’s return to Cambridge was threatened by a cafeteria zoning requirement was abandoned Wednesday at a meeting of the City Council’s Ordinance Committee, replaced by the argument that the zoning was made irrelevant by recent changes in Kendall Square and poorly thought out in the first place.

“This was very much an eleventh-hour brainstorming idea,” said attorney James Rafferty, who had a hand in writing the zoning changes for the biotech park sought by Alexandria Real Estate. “And we didn’t have a biotech company in the room to help us think through all of this … we weren’t mindful of how cafes are used today.”

What he meant, said Ed Dondero, Biogen Idec’s director of facilities, is that the pharmaceuticals company is “completely redesigning” its office space and how employees will work, eliminating traditional offices and creating a demand for areas where they can collaborate – including what would otherwise be the ground-floor cafeteria open to the public for 20 hours per week called for in the Alexandra zoning. “What we used to refer to as a cafeteria becomes one of our more collaborative areas,” Dondero said. “The conversations employees have among themselves a lot of the time can be confidential.”

The zoning was meant to make Kendall Square more lively, but that had happened already, officials said.

Biogen Idec, founded in Cambridge, had its executive offices moved to a Weston campus in 2010 by the former chief executive, a decision he’d made two years earlier. But James Mullen resigned shortly after the move, and successor George A. Scangos was quick to reverse the decision. The complete return to Cambridge became official in July 2011.

When the city’s Community Development Department asked to let Biogen out of its cafeteria requirement in November, it was because it had asked to “identify any possible barriers that would hinder Biogen Idec Inc. from relocating its headquarters back to Cambridge.” But the department’s head, Brian Murphy, didn’t bother with that argument Wednesday, instead pointing out that there has been a rapid transformation of Kendall Square from sterile canyons of high-rise office buildings to a hip dining mecca with an increasing number of residents and retail stores.

In fact, Murphy said, “There’s been some concern from restaurants about having to compete with a cafeteria.”

Another problem for the company: A cafeteria that serves the public has different licensing requirements that one only for employees, Rafferty said, and “Biogen really feels it doesn’t want to be in the business of running a restaurant.”

Development and business officials expressed confidence that the company’s expanded community laboratory area, lobby coffee shop, number of employees and landscaped plaza would contribute to the area’s vibrancy enough to forgive the removal of the cafeteria from the area’s zoning.

Of the city councillors at the meeting – chairman David Maher, Leland Cheung, Ken Reeves and Minka vanBeuzekom – only vanBeuzekom was skeptical enough to want to send the zoning change to the full council without a positive recommendation. The majority won out, and the change may reach the council as soon as Monday.