Cambridge celebs: Will Affleck’s awards keep him safe from the anti-‘Argo’? 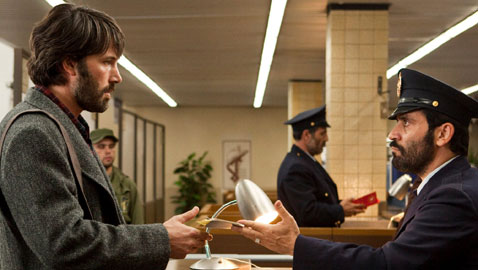 Cambridge celebs: Will Affleck’s awards keep him safe from the anti-‘Argo’?

Ben Affleck: It’s awards season, and “Argo” was long considered a serious contender for various Oscars. So there’s been much buzz in the past week over Thursday’s snub: no Best Director nomination for Affleck, although “Argo” is up for Best Picture, Alan Arkin is up for  Best Supporting Actor, Chris Terrio is up for Best Adapted Screenplay and there are also nods for Best Film Editing and Best Original Score. Quentin Tarantino, who was passed over for his job directing “Django Unchained,” told ContactMusic “I actually feel more sorry for Ben Affleck. He really deserved it and I think we all thought he was going to get it, so I feel really sorry for him”; and E! Online quoted Bradley Cooper as saying Affleck “got robbed” and Oscars host Seth MacFarlane agreeing, saying of Affleck: “He’s like the Matt Damon of directing.”

The same day, though, Affleck took home Best Picture from the Critics’ Choice Movie Awards, accepting with a joke: “I would like to thank the Academy. I’m kidding, I’m kidding. This is the one that counts,” he was quoted as saying by CBS News and other sources. “It’s very very cool for me … there was a time that a Ben Affleck critics award was a ‘Saturday Night Live’ sketch.” (This was the awards ceremony where it was noticed Affleck had drawings all over his hands, surely by his 4- and 7-year-old daughters. He also took home Best Picture and Best Screenplay from the Online Film Critics Society, The New York Times noted, and The Wrap reported him as a nominee for a Directors Guild of America award.)

Also: Affleck has confirmed “Live By Night” as his next project as a director, Screen Rant said, his second Dennis Lehane adaptation after “Gone Baby Gone” from 2007; and that explains him pulling out of “Focus” after Kristen Stewart signed on as co-star, MTV reported. “Basically I haven’t gotten enough writing done,” he said of the Lehane movie. “it became clear that if I took that job – it was in Buenos Aires for three months – I’d have to miss the deadline. I had to choose … I think the movie is going to be fabulous. I’m sure they’ll find a great guy for it.”

He also made clear to The Hollywood Reporter how serious he was about running for U.S. Senate, which is to say:

I was not serious. That was not something that I genuinely considered doing. I thought it was funny that it came out like that, and I have a great deal of respect for the political process, but I’m really at a prime point in my life with my professional career here. I’m loving the opportunities I’m getting, I’m loving the people I’m getting to work with, so that’s really where my head’s at right now.

Maybe he won’t find it so funny after the anti-“Argo” comes out! That’s right: Al Arabiya News reported that Iran’s government is going to fund a movie to “‘correct’ the distorted historical context” of Affleck’s semi-historical account of a rescue during the 1979 Iranian hostage crisis. It’ll be called “The General Staff” and directed by Ataollah Salmanianis. Many are likely eager to see the Iranian’s heartwarming account of totally justifiably holding 52 people hostage for 444 days in often cruel and even torturous conditions in an attempt to extort the U.S. government into turning over the country’s former dictator. Maybe an upcoming Best Foreign Film contender?

Matt Damon: It’s been a running joke on “Jimmy Kimmel Live” since 2003 that the host has no time to bring on Damon, who’s ostensibly been waiting in the wings week after week, and Damon has even made it onstage and into a seat before being told by Kimmel that, oops, time was up. Now, Entertainment Weekly says, Damon will actually get some time to talk. The date to watch: Jan. 24.

For anyone wondering why a Steven Soderbergh film starring Michael Douglas and Damon and costing only $5 million to make is showing on HBO instead of appearing in theaters, the answer has finally been given by Soderbergh in an interview with The Wrap: As a Liberace biopic, “Behind the Candelabra” was “too gay,” the director said.

Nobody would make it. We went to everybody in town. They said it was too gay. Everybody. This was after “Brokeback Mountain,” by the way. Which is not as funny as this movie. I was stunned. It made no sense to any of us … Studios were going, “We don’t know how to sell it. They were scared.”

The movie will air in the spring.

There have been mainly middling reviews for “Promised Land,” the anti-fracking film Damon made with John Krasinski and Gus Van Sant, but it remains politically potent, Bloomberg News said. Pennsylvanians similar to the townsfolk portrayed in the film say it will make it harder for natural gas drillers to take advantage of property owners and farmers, while the same drillers have bought pre-movie advertising time in most state theaters to run a 16-second ad pointing to a pro-industry website.

In Damon tidbits, the Los Angeles Times reports Damon has paid $15 million for a three-level home (complete with 35-foot vaulted mahogany ceilings, an atrium, a swimming pool and a basketball court) in the Pacific Palisades, Calif.

Paul Michael Glaser: A drug charge against Glaser, 69, has been dismissed since the “Starsky & Hutch” star and young adult fantasy writer has finished a marijuana basic education course, the Bowling Green, Ky., Daily News said Saturday. Glaser pleaded guilty to the charge after an anonymous tipster told police in the city he had pot – actually medical marijuana prescribed in California but still illegal in Kentucky. Glaser can have his record expunged after 60 days with no further offense, police said.

Glaser was born in Cambridge and attended Buckingham Browne & Nichols before making it in Hollywood. He lives in Venice, Calif.

Mindy Kaling: The auteur behind “The Mindy Project” told Us that she’s writing another book to follow up her “Is Everyone Hanging Out Without Me? (And Other Concerns)” from 2011, would like to see Sacha Baron Cohen and Danny McBride appear on her show and wants an even bigger collaboration with Reese Witherspoon: “We want to work together; we’re just trying to think of a good project.”

At a Fox comedy panel for the Television Critics Association, Kaling said Seth Rogan will be appearing on her show as “my first kiss that I met at Jewish summer camp … and there are some interesting twists about what has happened to his character since the time I saw him.”

Jimmy Tingle: The comedian helped send students to the American High School Theater Festival in Scotland in August, the Norwood Transcript and Bulletin says, with a Friday benefit screening of “Jimmy Tingle Live!” accompanied by a 15-minute question-and-answer session and a 40-minute comedy performance.