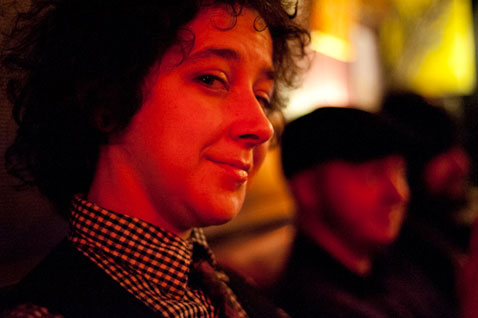 Jade Sylvan’s recounting of a trip to Oscar Wilde’s grave will be published in October, she said Wednesday. (Photo: Adélaïde Pornet)

If her candidacy for Best Poet in a Boston Phoenix poll and performance tonight at T.T. the Bear’s Place or at the Feb. 28 performance of Beck’s “Song Reader” wasn’t enough for Jade Sylvan to be excited about, her book “Kissing Oscar Wilde” has found a publisher.

She announced Wednesday that Write Bloody Publishing, a 9-year-old publisher based out of a popular Austin, Texas, poetry bookshop, had accepted her manuscript for an October release. Sylvan described “Kissing Oscar Wilde”:

The book is cross-genre work of creative nonfiction focusing on a trip I took last winter to Europe in which I performed poetry and returned to Oscar Wilde’s newly cleaned grave to replace my kiss. My friend and longtime collaborator, photographer Caleb Cole, came with me.

“I’m beyond excited and honored to have this book come out on such a groundbreaking press,” Sylvan said.

A reading from the book will be included at the 20-poet Write Bloody AWP All-Star-Ridiculous-Super-Reading taking place March 9 in Boston.

Before then, though, Sylvan – who also crosses genres from poet to actor and musician – takes the stage as the hip-hop Madame Psychosis (a name some will recognize as a homage to David Foster Wallace’s “Infinite Jest”) at 9 tonight, playing with The Rice Cakes, Sun of Sound and Endation at T.T. the Bear’s Place, 10 Brookline St., Central Square. And she appears again – as does Endation – at next week’s Somerville Theatre performance of the album Beck put out as sheet music.

Meanwhile, the poet competition goes on, with Phoenix rules saying people can vote once per day.

“I’m up against some pretty stiff competition, all of whom I respect and would be totally happy for if they won,” Sylvan said. “But of course, I would love to win.”