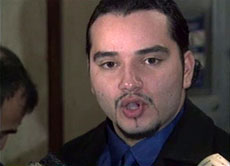 Opening statements in a trial for a man accused in a 2010 home invasion on Pearl Street and an earlier attack in Brighton are set for 9 a.m. Thursday in Middlesex Superior Court in Woburn.

Marcos Colono, 34, of Cambridge, was arraigned in November 2010 for an Aug. 26 home invasion on Pearl Street that resulted in the stabbing of a 53-year-old Harvard researcher and his young son.

Colono was listed as being a resident of Woodrow Wilson Court – less than a quarter-mile from the Cambridgeport home police say he broke into at 1 a.m. Aug. 26, 2010, with a butcher knife to assault an 11-year-old. It was in defending his son, according to information revealed at the arraignment, that the 53-year-old man was stabbed eight to 10 times in the chest and three times in the back.

The son had a single superficial stab wound and made a “frantic” 911 on his father’s cellphone to bring medical and police personnel, said Middlesex District Attorney Gerry Leone at a press conference at Cambridge Police headquarters.

“We believe there is no personal connection” between Colono and the father and son, Leone said to gathered media.

But Colono – said to have been identified by the Cambridge victims and witnesses – was linked by a trail of fingerprint and DNA evidence to a similar Sept. 21, 2008, violent home invasion and sexual assault of two young women in Brighton, police said.

Middlesex Superior Court Clerk Magistrate Michael Sullivan held Colono on $1 million cash bail with the conditions that he have no contact with victims or witnesses in either the Cambridge or Brighton cases, no unsupervised contact with children under the age of 16, no employment or volunteer work with children, GPS monitoring and a weekly report to the Probation Department and at their discretion.

Colono’s brother, Michael, was stabbed to death in 2003 by Harvard graduate student Alexander Pring-Wilson. Police said in 2010 that they considered the connection to another violent crime to be coincidental.