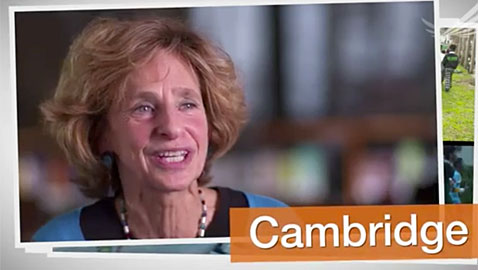 Sure to be discussed at length Monday as the City Council goes through its resolutions for the week: Cambridge being named one of six winners nationwide of the inaugural Robert Wood Johnson Foundation Roadmaps to Health Prize.

The prize, announced Wednesday at an event held at the Robert Wood Johnson Foundation in Princeton, N.J., gives the city a cash prize of $25,000 and recognition of its creation of outstanding community partnerships that help residents lead healthier lives.

“These prize winners represent leadership at its finest – trailblazers creating a culture of health,” said Risa Lavizzo-Mourey, president and chief executive of the foundation, citing “leaders from government, business, public health, health care and education who stand shoulder-to-shoulder working toward better health. The RWJF Roadmaps to Health Prize shines a light on their accomplishments. We hope it will inspire others to take bold steps to improve health in their communities.”

Cambridge is being honored for its innovative approaches to preventing disease and injury by addressing the root causes of poor health, which include poverty, low education, racism and unsafe neighborhoods, Lavizzo-Mourey said.

“Being a healthy city means more than having doctors and hospitals in your community – it’s about providing opportunities for education and good employment, preventing crime, strengthening families, and stopping the occurrence of illness in the first place,” City Manager Robert W. Healy said Thursday in a press release.

One of Cambridge’s biggest investments has been in children and families because early childhood experiences have an enormous impact on lifelong health, academic achievement and future earnings, city officials said.

The cities offers early education and parenting programs, such as Baby University, a free program for families with children up to age 3 that promotes strong parent-child relationships through workshops and playgroups; Let’s Talk, an award-winning early literacy program that empowers immigrant and low-income families to be their child’s first and most important teacher; and a nationally accredited, affordable preschool program that focuses on learning through play and teaches children school readiness and social skills.

“We have seen real improvements in health in Cambridge, and I attribute this in large part to the city’s collaborative spirit and willingness to tackle the ‘upstream’ causes of sickness and injury,” said Claude Alix Jacob, chief public health officer and director of the Cambridge Public Health Department.

Cambridge was among six communities selected for the award from more than 160 applications. The other winning communities are Fall River; Santa Cruz County, Calif.; New Orleans, La.; Manistique, Mich.; and Minneapolis.

More information on the prize and a video profile of Cambridge and the other prize winners is at rwjf.org.