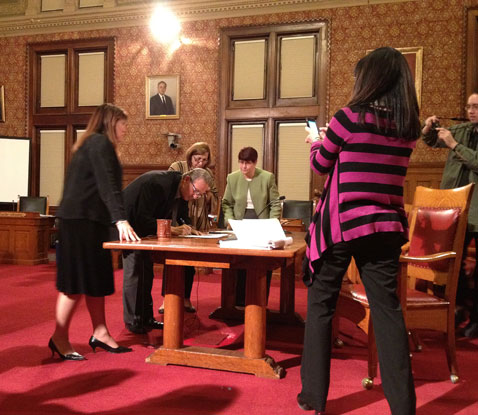 The developer Forest City got its zoning change Monday from the City Council and is able to move ahead on proposing a building for Millennium Pharmaceuticals near Central Square. The company introduced its plan for a 246,716-square-foot building at 300 Massachusetts Ave. on March 22, and can now go to the Planning Board with specific design proposals.

That 11-month slog (including an expiring petition and its refiling) had many obviously weary of the issue, and the vote came despite pleas by some to delay at least another week to close an apparent loophole.

The Forest City zoning change means Millennium can have a building reaching as high as 95 feet in parts, not counting a “penthouse” of heating and air conditioning machinery, while the zoning in place until Monday’s vote allowed up to 80 feet and mechanicals. Residents complained that the lab use was inappropriate because there are residential areas nearby, and they worried that the building’s noise would disturb them.

But as with recent meetings about Forest City, the main concern of residents and some officials seemed to be whether Forest City would deliver on promises of affordable housing.

And as with those recent meetings, officials for the company had concessions to offer.

They included tying a payment of $5 million for failure to build 25 units of affordable housing within seven years of a certificate of occupancy being issued to the consumer price index or a increase of 3 percent per year, whichever is greater – turning that $5 million into at least $6.2 million, said David Maher, the councillor who led the zoning request process through his Ordinance Committee.

In addition, extending the life of 168 units of affordable housing on University Park – the area created by the developer on Massachusetts Institute of Technology Land that has become suddenly a bit larger with the zoning change – is now tied to Forest City, “its successors or assigns,” meaning the promises of up to 75 years of affordability must be kept even if Forest City doesn’t stay the lease holder.

Councillor Craig Kelley, who asked for clarifications on both concessions from other elected officials and City Solicitor Nancy E. Glowa, seemed satisfied about the 168 units but not with the answers he got about how Forest City could satisfy its promise to give the city the additional 25 units.

Forest City has five options for providing the units, according to its letter of commitment to the city, ranging from building the units outright to “investment in and sponsorship of a project that will cause the production of 25 affordable units.”

Forest City’s executive vice president and chief operating officer, Peter Calkins, said Jan. 30 the company was already looking for a site so it could “deliver the housing ourselves.”

But to Kelley and vanBeuzekom, who led the alarm last year that 168 units of University Park housing would lose their affordability and turn market-rate, the option of “investment in and sponsorship of a project” seemed to offer Forest City a loophole: that it could put a small amount of money into another developer’s project, satisfying its requirement but resulting in fewer affordable units overall – because if it didn’t have the option, Forest City would build affordable units and the other developer would also.

“We shouldn’t be surprised if in a few years Forest City donates some certain amount of money, say $250,0000, to a development that will result in the production of 25 affordable housing units … and they say, ‘That was the investment,’” Kelley said. “If we’re not clear that can’t happen, we should probably hold off on this and make sure we’ve got it right.”

Kelley and vanBeuzekom proposed putting the vote off by a week or more to allow for the language in the letter of commitment to be perfected, but they met resistance from others who were sure Forest City wouldn’t use the loophole.

“We’ve got it right”

“I would say we’ve got it right,” councillor Marjorie Decker said. “How Forest City as a private corporation creates financial deals without public funding to get 25 units, I don’t care. I don’t think Forest City is lining up to give money to another private developer they’re not going to get a rate of return on. Let’s not fool ourselves – this is a business that exists to make money, and they do pretty well, I think, for their investors. My job is how do we negotiate with them to get the optimal rate of return for what we want.”

“If you’re worried about whether they’re trying to end-run us, if at the end of the day we get 25 new units because they somehow figure out how to be involved in that, that’s what we want: twenty-five units,” Decker said. “I don’t share [your] fears.”

“Twenty-five units is exactly what my goal was,” she said.

She went on to say she didn’t believe Kelley or vanBeuzekom really cared about the affordable housing – or knew something she and other officials had missed.

“It’s a little disingenuous to say that somehow all of us who are deeply, deeply committed to the affordability piece here somehow missed dotting our ‘i’s and crossing our ‘t’s,” Decker said. “It’s disingenuous and a little insulting to all of us who worked so hard to make sure the housing component was exactly where it should be. And it is.”

A preliminary vote to accept the letter of commitment as written was 8-1, with vanBeuzekom being the opposing vote.

Corrections: An earlier version of this story said Rossi was earning $990 million over three years rather than $990,000, and that the final vote was 8-1 rather than 9-0; that 8-1 vote is now mentioned above as being to accept Forest City’s letter of commitment. Cambridge Day regrets the errors.