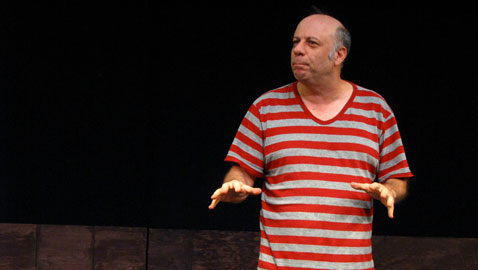 After decades in the spotlights of small comedy clubs across the country, this may be Eddie Pepitone’s actual moment in the spotlight. “The Bitter Buddha,” a documentary about his “middle-age career surge” after a variety of struggles – alcoholism and self-doubt are on the checklist – shows at The Regent Theatre in Arlington on Tuesday, with Pepitone and director Steven Feinartz along to present it. (Tickets are $10 in advance, $12 at the door of the 7 Medford St., Arlington, theater.)

Even better, The Bitter Buddha himself has a set scheduled Monday at ImprovBoston in Central Square.

“We are honored to welcome Eddie Pepitone, a veteran writer and performer who has inspired a generation of working comics,” said Zach Ward, managing director of the comedy theater.

Never heard of Pepitone – despite appearances on television shows such as “Community” and movies including “The Muppets” and “Old School”? That’s the problem the documentary intends to correct. Pepitone, 54, has largely been a comedian appreciated by other comedians, many of whom appear in Feinartz’ film.

It finds Pepitone in an optimistic mode. As he says at the start: “The only things stopping me today are genetics, lack of will, income, brain chemistry and external events.”

The photo leading to this story from the Cambridge Day homepage come courtesy of C.M. Gonzalez.