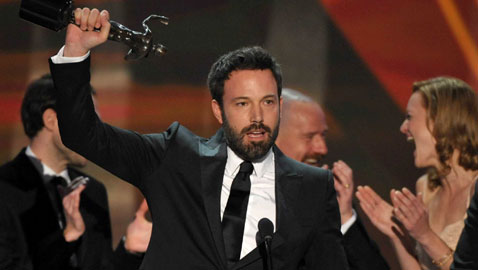 When Affleck won, he choked up, thanking his kids and wife Jennifer Garner: “I want to thank you for working on our marriage for 10 Christmases. It’s good. It is work but it’s the best kind of work and there’s no one I’d rather work with.” (Mostly people thought it was a weird or at least awkward thing to say in an Oscars acceptance speech, but Dr. Ruth Westheimer and Slate liked it.)

But Affleck’s whole day was family-centric. Before going to collect his gold statuette, he watched daughter Violet win her own prize in a spelling bee, and his daughters again did that cute thing of writing on his hands before the awards ceremony. And he said of mom Chris Affleck, still a Cambridge resident, that he “credits her for bringing him up to know the rights and wrongs in the world”:

She is an exceptional woman. She has been my role model. She was a really attentive, loving mother and she always made it clear growing up that there is a right way and a wrong way to treat people and that they are not here to tend to my whims and desires.

Anyway, with the Oscars over, the beard goes. As producers of “Argo,” Affleck, Grant Heslov and George Clooney kept their Tony Mendez-style beards through awards season. Immediately after the ceremony, Affleck shaved his beard off – and “immediately” is literal. He did it at at an after-party at Craig’s in West Hollywood.

Affleck has moved on quickly. On Thursday he was on stage at TED2013, talking about his Eastern Congo Initiative charity, rejecting the notion the violent nation can’t be turned around. “I don’t believe that’s true,” Affleck told the crowd. “I’ve seen and met people doing incredible things, mending the fabric of their lives – their family’s lives — brick by brick, stitch by stitch. It’s changed my views on what’s possible.”

Also moving on: New Zealand, where some were upset that “Argo” portrayed Kiwi embassy workers as turning away U.S. citizens fleeing Iranian revolutionaries in 1979, when in fact they helped the Canadians shelter the Americans. But Affleck said at an Oscars press conference that he “loves New Zealand and New Zealanders” and is now invited to visit the country by Air New Zealand.

Also also moving on: Ken Taylor, the former Canadian ambassador to Iran who had been upset Canada wasn’t given enough credit onscreen for its efforts saving the Americans. After Affleck thanked Canada at Oscars time, Taylor said: “Finally, he mentioned Canada. Under the circumstances, I think that was fine. It certainly acknowledged Canada.”

Not moving on: Iran, which is apparently still moving ahead on production of a film to answer the factually correct charges made by “Argo” that there was a bit of a hostage-taking kerfuffle a few years back. Man, this should be good. But it might not do too well at the Iranian box office; the Hollywood Reporter noted Iranian citizens seem okay with “Argo,” citing Wall Street Journal figures that it’s the nation’s most popular bootlegged film in years and an Iranian reflecting to the Los Angeles Times that he or she was “ashamed of what was done, and the results of the hostage taking were catastrophic for Iran.”

But with Obama’s presenting of the award and Affleck saying in his acceptance speech that he wanted “to thank our friends in Iran who live under terrible circumstances,” Iran’s Fox News – oh, sorry, that’s Fars News – called Warner Bros. a “Zionist company” (because Israel is involved somehow?) and said: “After distorting history, Ben Affleck continues to show a bleak picture of Iran.” The chairman of Iran’s Parliament, Ali Larijani, meanwhile, told the Times of India he suspected Affleck had been ordered to make “Argo” by the U.S. government.

Iran has an “unhealthy fixation on Ben Affleck,” wrote Rachel Marsden at townhall.com.

Dane Cook: At first it was a mystery who had replaced Jon Cryer as the voice of Dusty Crophopper, the hero of Disney’s animated “Planes,” which follows “Cars” and “Cars 2” (mentioned because it’s “in the same universe”) and is properly coming out ahead of the already planned “Planes 2” and even “Trains.”  Turns out it’s comedian Dane Cook, and the Onion A.V. Club quoted director Klay Hall with this explanation: “Dane Cook brings unmatched charisma and brilliant comedic timing and instincts to the character. He gives Dusty a great edge.” Den of Geek says Cryer made room for Cook by backing out of the project, which was headed straight to DVD but will now hit theaters Aug. 9.

Matt Damon: No surprise – Damon is among the best celebrities to wait on in a restaurant. Alexis Rhiannon at Crushable has a really fun rundown of who’s good, tolerable, borderline, odd and bad as customers, with much of the fun being that most of these celebrities are good to their servers. The whole item is a great read for its insight on people such as Louis C.K., Alex Baldwin, Catherine Zeta-Jones, etc., but here’s the bit on Damon:

Prepare to forget that he’s even a celebrity, that’s how nice Matt Damon is. Makes eye contact, asks intelligent and polite questions about the menu, and tips well. He actually met his wife, Luciana, while she was working as a bartender, so he clearly has a healthy respect for the industry, and I for one very much appreciated it.

Also, Damon, 42, and wife Luciana Barroso are going to renew their wedding vows in April, since their 2005 ceremony was so private (only New York mayor and Medford native Michael Bloomberg was in attendance). They have four daughters. 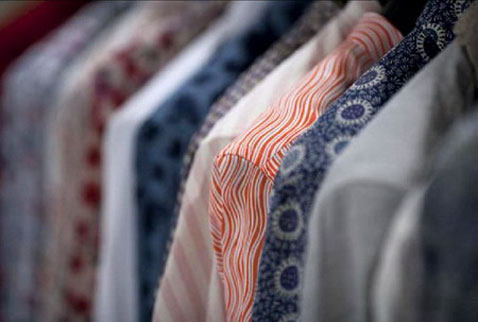 John Malkovich: It may seem strange that a family would sell counterfeit shoes through an eBay account in Malkovich’s name (as well as those of nine other celebrity identities), but that’s what the Lancashire Evening Post reports.  Does it make more sense if you know Malkovich is a legit menswear designer now on his 19th collection? His label, Technobohemian, was started four years ago after a legal dispute with partners ended his Uncle Kimono label, according to The Telegraph. The paper’s Luke Leith says Malkovich really knows his stuff:

The result, looking back at the past few seasons, is a collection of menswear that has only the odd unconventional aside – there a lot of collarless shirts and the occasional extraneous button on high-revered jackets. The oomph is delivered by those Malkovich-commissioned Italian fabrics: kaleidoscope prints on ties and scarves, and richly intricate detailing in the jackets, trousers and coats … Malkovich says he’s been interested in clothes all his life. “I know fashion can be intensely goofy, but it is something I’ve always taken pretty seriously.”

Passion Pit: Songwriter, singer and multi-instrumentalist Michael Angelakos liked “The director, cast and intention” of “Silver Linings Playbook,” David O. Russell’s Oscar-nominated drama (which won Best Actress for Jennifer Lawrence). But Angelakos, whose public struggles with bipolarity gives him some credence in talking about mental health, took to Twitter during the Feb. 24 Oscars broadcast to bash Hollywood’s recent tendency “to use mental illness as a way to bring added or almost entirely all drama to a piece.” The movie, he said, indulged in “cheap use of mental health as legs for plot.” It is, though, “absolutely” better than the media pretending mental illness didn’t exist, he agreed to a correspondent.

By the way, Passion Pit’s “Take a Walk” serving as backing for a Taco Bell commercial was no accident. The Yum! Brand’s fast-food chain had 18 commercials with bands such as Passion Pit in its Feed the Beat program, Billboard reports, and now is teaming up with Twitter to produce a documentary with Passion Pit and up-and-comer band Wildcat! Wildcat! by Sam Jones – whose previous rockumentary was the lauded “I Am Trying to Break Your Heart” with Wilco.