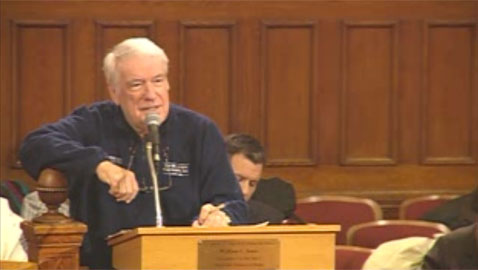 Richard Clarey speaks during the public comment period at a Feb. 11 City Council meeting – the first of two meetings in a row that he was interrupted by the mayor.

The city manager recommended a closed-door session Monday to talk about six discrimination lawsuits pending against the city, and resident and lawyer Richard Clarey thought it was a good time to weigh in.

With the city already having lost some $15 million on six similar lawsuits, with much of the cost going to disastrously failed appeals that had been pursued despite some public opposition, Clarey urged officials to “pay a lot closer attention” to voices of caution than they had in the past.

But when he spoke Monday during a City Council meeting’s public comment period, he almost didn’t get heard at all. He was cut off by Mayor Henrietta Davis, who said he was “out of order. This matter is not before us.”

“Oh. Okay. That’s fine with me. I thought it was item seven. I thought your executive sessions were item seven,” Clarey said, noting accurately where the matter was listed for council consideration on the night’s agenda.

Davis was elected by other councillors to be mayor Feb. 22, 2012, ending a protracted process that lasted onto a 10th ballot. She almost immediately began bringing a form of order to council and School Committee meetings that had been either less needed or less notable in the recent past, cutting off officials’ dialogue to ensure it ran through her instead of directly to each other, interrupting speakers if she felt comment was going on too long and snapping or getting into odd debates over form with certain council or committee members. Rules over debate have also been somewhat elastic under Davis, with one that there be no comment after a vote is called being enforced less than consistently and on a less than clear set of factors.

The council’s rules (this link downloads a copy) say citizens can speak during public comment:

upon items in the following categories of business: motions for reconsideration, city manager’s consent agenda, unfinished business from preceding meetings, applications and petitions requiring approval or referral by the City Council, consent resolutions. Consent resolutions and orders relating to policy analysis or development, committee reports and communications and reports from other city officers.

But the mayor ventured into peculiar territory by arguing that although the closed-door session was on the city manager’s consent agenda, Clarey still couldn’t talk about it during his allotted three minutes of public comment because “there is no further information … as far as I know, we just have a request to go into executive session. I don’t think that’s license to talk about any legal matter the gentleman cares to speak on.”

Councillor Craig Kelley also said he was confused by her interpretation and noted it was the second meeting in a row in which the mayor had interrupted Clarey during public comment. At the Feb. 11 meeting, Davis had asked Clarey not to refer to specific legal cases facing city-sponsored home rehabilitation programs, while Kelley argued that “we comment on lawsuits all the time.”

“This is the second time in a row you’ve tried to silence this man,” Kelley said, referring to Clarey, a longtime ally in North Cambridge politics.

In this case, Kelley said, Clarey’s comments were “on something the manager submitted to us that refers to a waiting order that has to do with six lawsuits against the city. You may not want to hear about it, but I certainly do.”

“I do believe it is not before us,” Davis told Kelley, before offering a way she thought Clarey could yet be heard. “If you’d like to suspend the rules to allow —”

“There are no rules to suspend, madame mayor,” Kelley insisted. “It’s on the city manager’s agenda.”

Clarey, free to speak, said the city had spent some $700,000 on nine lawyers just for appeals in the Malvina Monteiro case, which dated back to 1998 and was finally wrapped up with payments last year along with a number of related and similarly race-based cases. But in June, when Kelley asked if there were other discrimination lawsuits councillors should know about, city lawyers said there were six.

The next month, on July 30, the councillors asked unanimously that City Manager Robert W. Healy “report back to the City Council in executive session the nature of the six lawsuits, their status and any others that might have been filed.” A legal matter that has yet to be settled is one of a handful of reasons public officials can meet without allowing in members of the public.

On Monday, which was 210 days later, Healy wrote to say he agreed there should be a closed-door session to talk about the lawsuits.

When the item came up on the city manager’s agenda at Monday’s meeting, Kelley tabled it.