Reknitting the fabric of East Cambridge 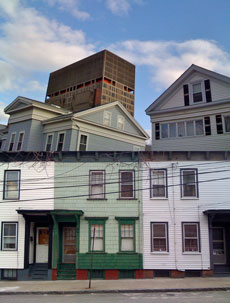 Reknitting the fabric of East Cambridge

When my wife and I came to this country with two suitcases 13 years ago, we quickly fell in love with Cambridge. Although our ardor slumps like a grizzled slush-bank at this time of year we know we were right to get hitched to this city and bring up our family here.

For our first two years we rented a small apartment in Harvard Square, where our neighbors were mostly too preoccupied to talk to us and to each other. Eleven years ago we moved to East Cambridge, and our “life” in this city really started. With a young baby and one on the way we quickly came to know all the people living on our Sixth Street block, some of whom were the second or third generation of families born in the same house; some newcomers like us; some students; and some who had chosen East Cambridge as the perfect place to retire. We were immediately made to feel at home.

After a few short months Mike, my new friend across the street, turned me on to the East Cambridge Planning Team; as if imparting some well-kept secret, “just give it a try” he said, “I know you’ll like it.” I rolled up at East End House one Wednesday evening soon afterward and descended the stairs to a slightly grubby basement room, emitting a crunchy buzz of animated talk and cookie munching. At the chairs and tables arranged in a big square I found a group of neighbors ranging from 6 to 90 years old, presided over by a lady deeply absorbed by her knitting. The atmosphere was lively, there was work to be done; these people clearly meant business.

Since that evening I have been drawn deeper and deeper into the belly of the ECPT, becoming its vice president, and becoming addicted to early morning and late-at-night e-mails, the weekend board meetings, the two Wednesday evening meetings a month and the proliferation of working groups on projects as diverse as the Gold Star Mother’s Park renovation, Lechmere Square Public Market, Broad Canal boardwalk, Lopez Avenue Community Gardens, Kendall Square master plan and Sullivan Courthouse Redevelopment.

The one thing that ties all this work together is the dedicated group of neighbors in East Cambridge I met that first night. This is a group of people who look out for each other, welcome newcomers, try to make change work positively for the community and above all want to repair the damage left by the generational retreat of industry that left our neighborhood surrounded by surface parking lots and post-industrial brownfields from Kendall Square to North Point.

Over the past two years I have been lucky enough to be part of the Planning Team’s Kendall Square working group, in which we tried something new: Rather than wait and react to other people’s plans we decided to hire our own urban design consultants, CBT Architects of Boston, to help us develop a vision for Kendall Square that would give the neighborhood a clear, organized voice in the city’s master planning process for this part of the city. Many dozens of us attended scores of meetings over that time to educate ourselves, refine our vision and communicate it to anyone who would listen. We developed a neighborhood vision that was not knee-jerk resistance to change, but rather one that sought to harness change to bring “More Homes, Parks and Stores to Kendall”; that was our motto, and it made a pretty cool T-shirt.

In the two short years since we convened our working group for the first time, Third Street has already taken off with new restaurants, cafes, stores and homes, and now, with the Massachusetts Institute of Technology zoning proposal, the area around Main Street can take off too. You probably know it as the place where the line of flags and brick sidewalk is about the most exciting thing happening right now, but the proposal will bring almost 70,000 square feet of stores, hundreds of homes, a series of public open spaces and close to $10 million in city taxes each year. It will also finally give Kendall Square a “heart,” where MIT and the city will mingle in a way that has never happened before.

This area of a few city blocks is arguably one of the most innovative places on the planet, but could be more so. At the moment it feels decidedly lackluster, with a whiff of suburbia. I do hope the decision-makers in the city seize this opportunity to change that and embrace the MIT plan.

I see a bright future for East Cambridge. Persuading people to think beyond the narrow confines of profit versus resistance is the way to re-knit the city with great public open space, active streets and locally owned small-scale retail.

NorthPoint came with 10 acres of new parks; the Alexandria development with nearly 3 acres of parks and a redesigned and pedestrian friendly Binney Street. A re-knitted East Cambridge, where the old live-work neighborhood of factories and densely packed houses is reinterpreted with centers of life science research and new condominiums and apartments, is something worth working for.

This new East Cambridge will be in many ways just the same as it has always been: welcoming to people who have just arrived in the country, convenient for those that want to work or study all the hours of the day and night, a good place to bring up a family. For my family it is home, and we love it.

Chris Matthews is vice president of the East Cambridge Planning Team, a landscape architect and lives on Sixth Street.