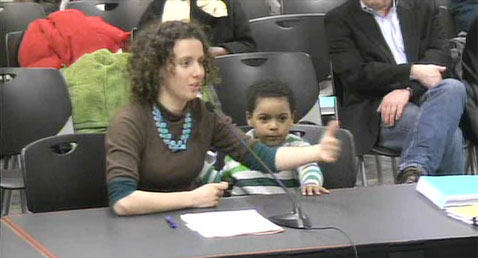 Cries of unfairness and broken promises over world language and special education programs hit the School Committee and district administrators Tuesday as they wrestled with setting the  budget for the next fiscal year.

Pleas from Superintendent Jeffrey Young for a chance to focus on changes and initiatives already under way in the $150.9 million budget only spurred concerns about the process itself from parents. The district is in the first year of its Innovation Agenda, which created middle school campuses for the first time in Cambridge history and aims to align curricula better districtwide.

“A maintenance of effort budget might be reasonable if we were continuing with status quo programming,” parent Mary-Ann Matyas said. “We are still in the critical implementation phase of the Innovation Agenda, and this year’s budget leaves out key personnel and programming initiatives to ensure the Agenda moves beyond vision and rhetoric … implementing the Innovation Agenda is not budget neutral.”

Joyce Gerber, a candidate for the committee in the last election, went further, saying the entire “budget process is broken.”

Most of the dozen-plus speakers focused on the lack of comprehensive world language program – something Young has already acknowledged is a “broken promise” – and ways in which funding could help faltering programs directed at special education students. Melissa Preston Bulyko warned of caseloads reaching up to 109 or even 151 students for a single school psychologist, and Lisa Downing noted a dyslexia program that has had only one student since starting in September, despite some 20 percent of district students qualifying for it.

Resident Emily Dexter made her own budget proposal, suggesting the costs for preschool and out-of-school time be handled by the city and Department of Human Services, freeing up money  for such things as a program evaluator salary and world language.

Shortly before committee members ended the meeting at around 9:45 p.m. – some had been there since a 4:30 p.m. subcommittee meeting – there was a flurry of requests for Young to grapple with before the budget is voted April 2 and sent to the City Council. Some reflected the parents’ concerns directly.

A reevaluation of the caseloads for psychologists was requested by Alice Turkel and Marc McGovern, for instance, along with a look into a plan to add a staff member to each “upper school” for use at the discretion of each school’s principal; and to add two librarians by eliminating four library assistants, a plan proposed by library staff.

Patty Nolan and Richard Harding asked the superintendent to work with the Cambridge School Volunteers to find that program funding. The tutoring program is asking another $29,365 while it fundraises another $40,000 itself to add to its current $200,000 in private funds, program leaders said in a presentation.

“I might as well join this parade. I can open up the floodgates as well as anyone else,” Fred Fantini said, asking that Young hire some 15 assistant coaches on varsity athletic teams.

But nearly an hour of budget and priority debate was about world language, which had been a foundation of the Innovation Agenda and committed for the upcoming 2013-14 school year in the current adopted budget. “The superintendent has committed to a review of the world language program in FY13, and to the design of a coherent world language program for elementary students that will be implemented beginning in FY14,” the budget said.

One problem the district ran into, as explained at the March 12 meeting: Not enough time in the day. Ongoing contract negotiations with teachers and the Cambridge Education Association include a look at a longer school day, McGovern said, but in the meantime a motion he sponsored with Nolan and Mervan Osborne asked that a world language program be developed for the 2014-15 school year; McGovern replaced his own motion Tuesday with a request that the superintendent work toward a program for no specific date and give a progress report the second week of November.

“To see this come forward as not even a real intention for next year saddens me,” said Turkel, noting that a music program had just been added to three schools without extending the school day. She proposed a substitute motion that the superintendent spend the coming year developing a JK-5 program to launch in 2014-15.

That drew objections from the superintendent, who explained how the schools found time for the grant-funded music instruction (one took time away from art instruction, for instance), and from McGovern, who said it was easy to make a motion for which “the public would love you” but got the district no closer to finding the time necessary for a class.

Ultimately Fantini moved to table the entire conversation and Turkel withdrew her motion, sensing little support among the other members.

The debate began on a lighter During public comment Rachel Weinstein brought up her son Omri Barak Thomas, 5, and the room waited patiently while he introduced himself, said where he lived and, finally, imparted his message to the committee members.

“I want to learn everything,” Omri said haltingly, “in Spanish.”