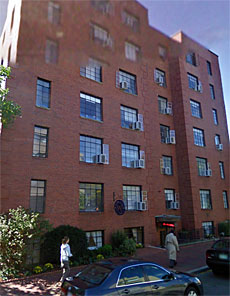 A two-bedroom apartment in this building on Brattle Street in Harvard Square was listed in late March as costing $3,270 per month, with West Cambridge named as the priciest neighborhood in Cambridge by Zillow and Curbed.com. (Photo: Google)

Representative rents were surveyed a few weeks ago, and should be available in a week or so to let people see what’s happened over the past six months, said Christopher Cotter, housing director of the city’s Community Development Department.

“We certainly see rents rising. I think we saw three-bedroom rents exceed $3,000 a month for the first time last fall, and we’re expecting for that to have gone up since that time. Two-bedroom apartments were just below roughly $2,800 and have gone up a little bit as well,” Cotter said.

His testimony at a City Council roundtable followed the use of data from the department’s website by an official from the Massachusetts Institute of Technology, and that university official was giving city data to Decker because she was demanding to know whether grad students got a better deal on campus housing than they did competing with Cambridge residents for off-campus housing.

They did, said Israel Ruiz, executive vice president and treasurer at the MIT Corp. Based on the city’s September survey, Ruiz gave the median monthly rent for a two-bedroom apartment as $2,800 citywide versus $2,400 to $1,576 for university-provided housing, for between 12 percent and 44 percent in savings. A one-bedroom apartment citywide was given as renting for a monthly $2,300, while the university asked from $1,500 to $1,200, for a savings of between 35 percent and 48 percent.

The answer seemed to satisfy Decker.

But then Cotter essentially took it all back.

First councillor David Maher, who ran the more-than-three-hour roundtable, interjected that it was “important to note” that the figures being cited by Ruiz and Cotter didn’t “mean that’s what the average rent is in the city – but rather, that is what the average vacancy is being advertised for.”

“I heard the gasps around this table when the $2,800 was stated, and I think the reality is, rents are significantly lower,” Maher said.

“That’s right,” Cotter said. “It’s really hard to get at what the average rent is because it’s not data that’s publicly accessible … Certainly there are a lot of tenants in smaller buildings who’ve been there for a long time, and it’s harder to get at that number.”

The exchange implied that the savings students saw from the university – which were compared with median rents anyway – were less than Ruiz explained to Decker, possibly even disappearing at the low end.

Every six months over the past 15 or so years, Cotter said, his department has surveyed rents, although in the past five years it’s culled data from online sources such as Boston.com and Craigslist while “trying to look at it like anyone, putting asking prices together.” Cotter said Friday that the information is presented with the understanding that the asking price isn’t the actual cost of rent, although on the Demographics and Statistics FAQ page of the department’s website the question is simply: “How much does it cost to rent an apartment in Cambridge?” And the answer is given without qualifiers:

According to a September 2012 survey of Boston.com and Craigslist.com, median monthly rents for market-rate Cambridge apartments are $2,300 for a one-bedroom unit, $2,800 for a two-bedroom unit and $3,175 for a three-bedroom unit.

The figures also show up in reports such as February’s “Planning for Housing in Cambridge: Past, Present and Future,” which can be downloaded as a PDF from the Community Development Department website.

Despite the seemingly official use on the website, in city reports and by the university, officials are casting doubt on the figures. Maher said he’d just seen a neighbor’s two-and-a-half bedroom apartment offered for $3,200. “And I know that they got $2,300 when they actually rented it. So it was significantly less,” Maher said. “I just put that out there as a cautionary note. We have hundreds of these would-be Realtors who think that their property is worth” more than it really is.

As a median price for a rental with just below three bedrooms, though, $3,200 is roughly in line with the figures given on the city’s website – possibly on the high end – while Curbed.com, using data from a Zillow study, lists four Cambridge neighborhoods as being among the 10 priciest places to rent apartments in Greater Boston. Posted Jan. 22, the list includes Cambridgeport, East Cambridge, Aggasiz and West Cambridge ranging from ninth on the list to fourth and having median rents – averaging apartments of all sizes – from as little as $2,626 to as much as $2,851.

A screen capture from a city website shows an official description of rent costs.