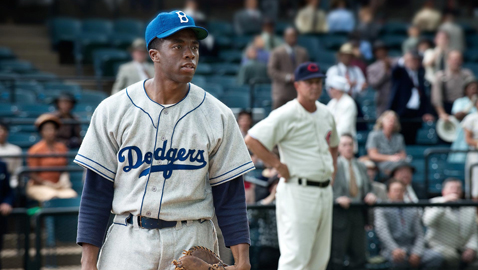 The new-look Red Sox bring the excitement back to Fenway after two downer years that made the preceding seven years of World Series bliss seem like 84 years away. You all remember “The Curse,” right? Those 84 years may still seem like a long time to go without. But consider the plight of blacks in America: nearly 100 years of slavery and almost another 100 until Civil Rights, then endless cycles of documented racism and prejudice thereafter.

Recent historical movies such as “Lincoln” and “Mississippi Burning” take us back and make us feel both ashamed and proud of our pasts – ashamed that anything like slavery, segregation or inequality of rights based on color was ever possible, proud we were able to correct the injustices and move beyond. “42” follows that vein. We all know Jackie Robinson was the first black player in Major League Baseball, but how many know the story of how he got there?

He was not the greatest player in the Negro League, and he did not set out with the notion to shatter barriers. No, Dodgers president Branch Rickey saw an opportunity to make a good baseball team better by expanding the talent pool, and in doing so knew what he would be doing was the right and moral thing to do.

As “42” has it, Rickey (played by a gruff, avuncular Harrison Ford with gonzo bushy eyebrows) wanted a player who was young but established, talented but not yet peaked and, most importantly, possessed of the disposition to stand the heat. The portrayal here of Robinson by the handsome and sculpted Chadwick Boseman is far different from how Robinson’s played himself in Alfred E. Green’s 1950 film, “The Jackie Robinson Story,” made just three years after Robinson first took the field with white players in a MLB game. Robinson as Robinson was quiet and soft-spoken. Maybe that’s how it was, or maybe Robinson was not as skilled of an actor as he was a ballplayer and reluctant to tap into the anger and frustration that surely must have come with the hate he endured. Or perhaps, the studio decided to soft-pedal it to make it more palatable to mainstream America? Whatever the case, Boseman comes across as an intelligent and likable young man on the edge. He simmers and seethes as slurs, sideways glances and underhanded tactics addle him at nearly every turn. There’s always the chance he’ll blow, but Rickey’s always nearby, coolly reissuing the mantra to fight the bigger fight, to not get into it on “their” terms and not become the savage they he is, but to win the battle on the field through hitting, running and fielding. 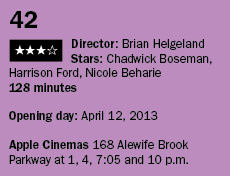 “42,” directed by Brian Helgeland, who has New England roots and won an Oscar for penning “LA Confidential,” follows Robinson through the early tumultuous years when he was first signed, the minor league spring training down in the segregated South and ultimately that historic day in 1947 when he broke the color line as a Brooklyn Dodger. Many teammates stood by him, but many refused to have anything to do with a black man and a few even started a petition against him. But every time the pendulum swung heavy against Robinson, Rickey was there to tamp it down.

The relationship between the two, their sincerity, mutual respect, support and ability to endure together, carries the film even when Helgeland pushes too hard to make a political point or gets dangerously close to oversentimentalizing. Mark Isham’s muscular score has a polarizing effect too, at times atoning for Helgeland’s indulgences and at other times enabling them. The two leads also get plenty of support from the strong ensemble, including the lovely Nicole Beharie as Robinson’s understanding and loving wife, Lucas Black as Pee Wee Reese and Christopher Meloni as one of the most smash-mouthed and free-living skippers in the game, Leo Durocher.

It should be pointed out that in 1945 the Red Sox brought Jackie Robinson to Fenway for a tryout. That interlude has largely been called a charade to sate the loudmouthed Boston liberals of the time. The Sox, in 1959, were the last team in the MLB to integrate a black player onto their roster.

Robinson went on to win the inaugural Rookie of the Year, the Dodgers went to the World Series that year and later, in 1955, five years after he made his low-budget biopic, won the World Series with Roy Campanella.

The 42 of the title is the only number universally retired in baseball, and on April 15 (the day Robinson took Ebbets field), all players wear number 42 to commemorate Robinson’s brave feat (Reese makes a comment like that to Robinson as haters in Cincinnati rain down boos – “Maybe one day we’ll all wear 42 and they won’t be able to tell us apart”).  There is only one player left in the MLB who wears the number, and that’s longtime Yankee closer Mariano Rivera. Once he retires, the number’s retirement will be complete. “42” is a fine tribute to a man’s ability to endure for the better off all and the insightful visionary who put it all in motion. Not deep, but proud.