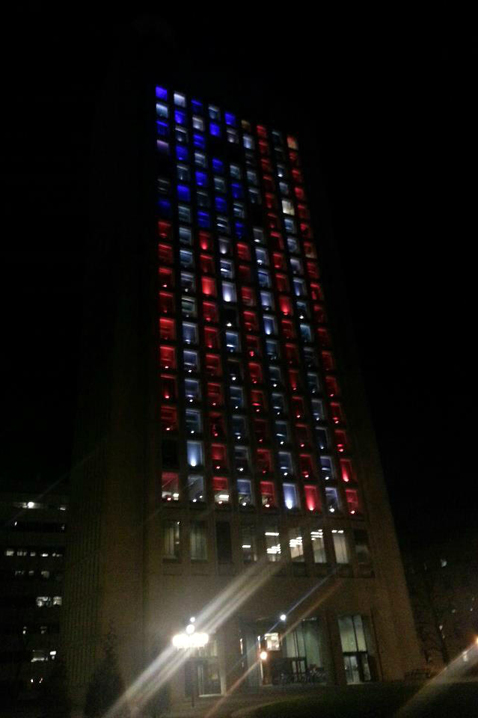 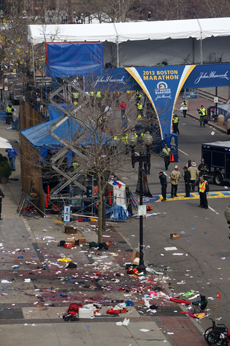 There was no threat to public safety in Cambridge on Monday, despite several alarms throughout the day after explosions at the Boston Marathon finish line, Cambridge Police said.

After two bombs went off at site in Copley Square, injuring 176 according to Commissioner Edward Davis of the Boston Police Department and killing three, including an 8-year-old, concerned citizens flooded police in Boston and Cambridge with reports of potential threats.

A fire at the JFK Library and Museum in Boston was found to be unrelated. According to The New York Times, authorities found a third dangerous “device at St. James and Trinity streets that did not explode … and two other devices were found, including one in Newton,” also along the 26-mile marathon route. (This seemed to be refuted Tuesday in a governor’s press conference.) While the injured were treated and officials investigated, the Massachusetts Bridge into Cambridge was closed at about 3:30 p.m., portions of the T were shut down and area businesses and institutions were forced to react as alarms kept reverberating among a rattled populace.

A report of a possible incident, bomb or threat in Central Square at 3:51 p.m. was cleared at 4:18 p.m., according to the police department’s Twitter account.

A 4 p.m. report of a problem at Brattle Street and Farwell Place followed. Samuel Weinstock, a reporter at The Harvard Crimson, quoted a city firefighter in saying a suspicious package had been found. After a responder in a bomb suit went through a trash bin there, the area was cleared for pedestrians again.

A 4:29 p.m. report worried there was a suspicious package “near” the Harvard Square T stop.

At 4:50 p.m.report came in of a threat at Dunster and Mount Auburn streets. Weinstock said less than 10 minutes later that the intersection was clear.

Meanwhile, the media were saying a suspect was in custody at one of the area’s locked-down hospitals, a rumor ultimately refuted at about 6:02 p.m.

“Our thoughts are with all affected,” police said. “We will investigate any and all reports of suspicious packages in Cambridge as we continue to monitor the situation.”

Cambridge’s city government was closed Monday for the Patriots Day holiday, but Mayor Henrietta Davis said flags would fly at half-staff Tuesday to honor the victims of the Boston Marathon attack. Overnight, though, the Green Building at the Massachusetts Institute of Technology had already been adapted for the situation. The institute’s Chris Peterson tweeted out this image of the building:

Businesses and institutions closed in response to the violence and uncertainty, from Harvard’s JFK School of Government to as far from the blasts as Davis Square. Harvard canceled evening classes while reassuring members of its community at 4:14 p.m. that “we are not aware of anyone from our community who was injured.” Lesley University canceled Tuesday classes at its Art Institute of Boston but kept its Cambridge campus classes running. Other places, including the restaurants Oleana and Temple Bar, let it be known they were open for the night, with Oleana saying that “If marathoners need a warm meal or a safe place to wait for loved ones, we will help.”

Candidates for office reached out, with council candidate Kristen von Hoffmann issuing a statement that “Cambridge stands united with the City of Boston and will continue to assist the victims of this senseless tragedy.” She highlighted a link to a news roundup of “How you can help.”

Josh Dawson and Jay Livingstone, Democratic candidates for the vacant 8th Suffolk state representative seat, announced together that they were suspending campaign events to concentrate on supporting the city and its citizens, and they passed on information as well: a phone number for families trying to find loved ones, at (617) 635-4500, for anybody wanting to report suspicious activity, at (800) 494-TIPS.

Middlesex Sheriff Peter J. Koutoujian said his office’s SWAT team, Community Command Center and members of its transportation division were deployed to Boston to help Boston Police, and he offered continued support. He too urged “anyone with information about the person, or persons, responsible for this heinous act to immediately contact Boston Police or the FBI.”

Social media was alive with rumors, speculation, information, prayer and offers of help – or just expressions of sorrow. Among those from the people who’ve called Cambridge home:

“Such a senseless and tragic day. My family and I send our love to our beloved and resilient Boston,” Ben Affleck tweeted.

Comedian Dane Cook tweeted: “My prayers with everyone in Boston right now after this atrocious act of violence!!”

“I’m horrified by what happened on this special day in Boston, my hometown!! I’m sick to my stomach!!” tweeted Traci Bingham, the actress and model.

This story was updated throughout the day and rewritten when events quieted.