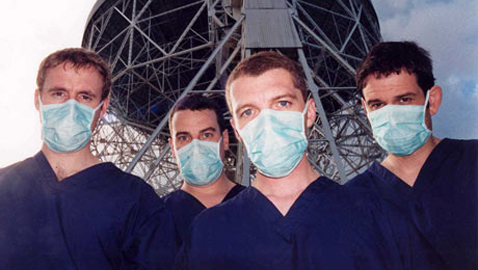 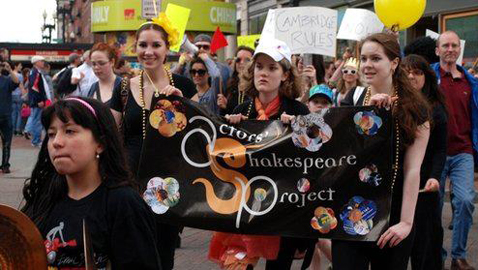 Quick! Get to the 6th Annual Bookish Ball and Shakespeare’s Birthday Celebration! There’s a 4:30 p.m. free tour of literary Cambridge, including free cake. Then Richard Henry Dana Jr. of Cambridge Historical Tours brings people past the site of North America’s first printing press, the oldest foreign book store in the country, the houses of T.S. Eliot, Henry Wadsworth Longfellow and even H.A. Rey, creator of Curious George! The group depart from Plympton Street and Massachusetts Avenue. Afterward, there’s a hodgepodge of toasts and stories centering around the Bard, who may have known the Harvard family in London, at John Harvard’s Brewery and Ale House, 33 Dunster St., Harvard Square.

Many bookstores in Harvard Square offer promotions and sales today, including the Grolier Poetry Book Shop, 6 Plympton St.; Harvard Book Store, 1256 Massachusetts Ave.; Harvard Coop, 1400 Massachusetts Ave.; Schoenhof’s Foreign Books, 76A Mount Auburn St.; and The World’s Only Curious George Store, 1 JFK St. Also, tickets to The Donkey Show (a version of “A Midsummer Night’s Dream”) are $15 if you buy using the code SPRING15 online, by phone at (617) 547-8300 or in person at the A.R.T. box office at the Loeb Drama Center, 64 Brattle St.  (The code is valid through June 30.) Oberon is at 2 Arrow St.

Try not to learn anything at the Festival of Bad Ad Hoc Hypotheses. The festival (also known as BAH!) celebrates well-argued and thoroughly researched but completely incorrect evolutionary theory. It is put on by some of our greatest science cartoonists, and tickets are $10 (or $5 for students with any student ID). Buy tickets (and posters) online for a package price or at the door, subject to availability. It’s from 7 to 10 p.m. Saturday at the Massachusetts Institute of Technology’s Building 26-100, also known as the Compton Laboratories, at 60 Vassar St.

Take part in amazing sidewalk astronomy. The Cambridge Science Festival celebrates National Astronomy Day with the help of professional astronomers from Boston University who will show off the wonders of the cosmos and answer questions – but you’ll have to cross the river to Boston University’s Marsh Plaza and Coit Observatory, 725 Commonwealth Ave., Boston. It’s from 8 to 10 p.m. Saturday at Marsh Plaza, directly across from the BU Central stop on the green line’s B train. 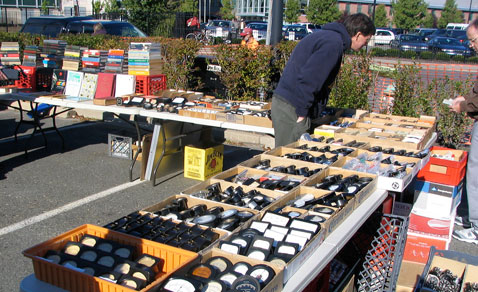 Hit MIT’s Swapfest. Swapfest is the legendary monthly high-tech, computer, electronics and ham radio flea market where you can “buy, sell or swap all things nerdly” between 9 a.m. and 2 p.m. in, appropriately enough, a garage, namely in the Albany Street Garage and its adjacent lot. The event costs $6 at Albany Street between Massachusetts Avenue and Main Street, near Central Square. For information, call (617) 253-3776 or send e-mail to [email protected].

Chew on Clinic’s “Bubblegum” at The Sinclair. The spooky, organ-driven anonymous post-punk British band Clinic (band members wear surgeons masks and scrubs while performing) have a new 40-minute album out called “Bubblegum.” Hear new tracks and old favorites as well as the bands No Joy and The Cobbs for $15 at The Sinclair, 52 Church St., Harvard Square.