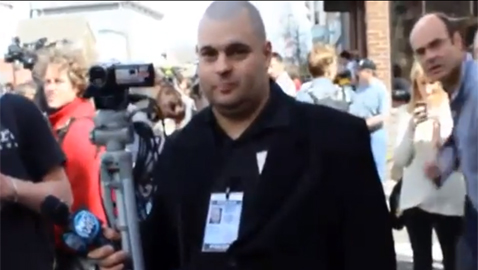 Top local provocateur Roger Nicholson was on the scene April 19 as law enforcement and the media descended on Norfolk Street, home of bombing suspects Tamerlan and Dzhokhar and Nicholson’s former neighborhood, when the former Cambridge Community Television personality spotted a reporter for the right-wing conspiracy site InfoWars setting up a camera.

The reporter, Dan Bidondi, had managed to ask the first press conference question of Gov. Deval Patrick after the April 15 bombing of the Boston Marathon, which killed three and injured 176 – including blowing off the legs of many. His question: “Is this another false flag attack staged attack to take our civil liberties?” (Patrick’s steely-eyed response: “No. Next question.”)

On April 19, with the area suffering its second day of anxiety after the death of an MIT police officer, a carjacking, shootout and manhunt and revelation the suspects in all this were neighbors and classmates, Nicholson decided to rout the conspiracy theorist. He took out his camera and began filming Bidondi, letting loose a string of insults, challenges and demands for him to leave.

“What are you doing in my neighborhood? Why don’t you go home?” Nicholson asks Bidondi from off-camera.

“Keep drinking your fluoride,” Bidondi replies – fluoridated water being a mind-control agent, according to some conspiracy theorists.

Bidondi rightfully says in the video that he has a First Amendment right to be there, although he  also claims that InfoWars is the No. 1 “alternative media source in the world.”

In all, the exchange goes on for some 10 minutes, drawing the attention of residents and media standing near the two. When people ask why Nicholson is harassing Bidondi, he explains that the reporter’s site believes the Marathon bombing was pulled off by the FBI. No one gets between Nicholson and Bidondi, and the InfoWars reporter – who never quite succeeds in setting up his equipment or doing any actual work – eventually retreats through the crowd.

Nicholson, most recently the inspiration for the Somerville Board of Aldermen overturning a 1934 law against public performance and gatherings, acknowledged his diatribe against Bidondi was crude and mostly devoid of reasoned argument – because he didn’t think any was deserved. “That’s how you have to treat them,” Nicholson said. “To show them they’re worthless, which they are.”

His videos have been reposted by sites such as Deadstate.org, where one is labeled “Boston guy owns conspiracy theory reporter,” and many comments about Nicholson’s actions are favorable, such as “The InfoWars dork had nothing to say, because he was called out on his bullshit” and “Love this guy, and damn straight putting fucking stupid-ass conspiracy theorists on blast.” Other comments are critical but evenhanded, saying “All I saw was on guy looking like an idiot and another one sounding like an idiot. If he is so intellectually superior, he would not have to cuss to make his point.”

But Nicholson said he had to temporarily cut off comments on the video on his own YouTube page, where conspiracy theorists were flooding him with e-mail and even making death threats.

On Tuesday, Nicholson appeared on MSNBC with Martin Bashir, calling Cambridge a great city that was “doing it right” on diversity and calling Alex Jones “the David Koresh of broadcasting.”

Visit NBCNews.com for breaking news, world news, and news about the economy

Early in the day, a Facebook page popped up as a tribute to Nicholson’s assailing of Bidondi, Jones and their theories. It’s called “Thanks Boston Guy.”