‘Star Trek Into Darkness’: Adrenaline-infused trip through a convoluted tale 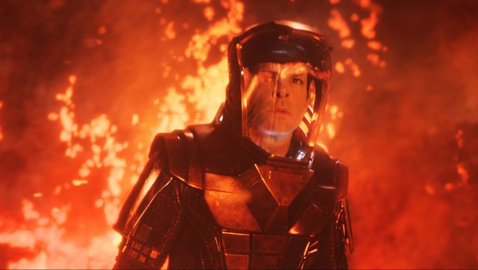 ‘Star Trek Into Darkness’: Adrenaline-infused trip through a convoluted tale

I now know why Paramount was so tight about letting the press get an advance peek at the second installment of J.J. Abrams’ reboot of the Star Trek enterprise; there’s a huge reveal in the middle of “Star Trek Into Darkness” that will have Trekkie loyalists either in rapture or hell. 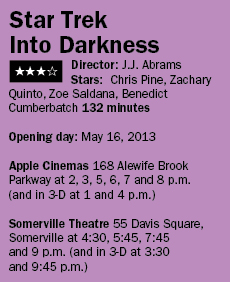 That aside, the 2009 release of Abrams’ series resurrection hit a nasty snag here in Boston when the Globe ran a review more than 24 hours before the embargo date the studio set and expected the media to respect. It was a four-star review, but you could see people at the studio and the PR firms here in town that were handling the press leaping from the windows.

But back to the darkness. Many sci-fi franchises – including “Star Wars,” “Alien” and the initial big-screen launch of “Star Trek” – hit their golden moment in the second coming (“The Wrath of Khan,” “Aliens” and “The Empire Strikes Back”). Not so much here, but it’s close. “Darkness” has a lot more action and twists than the 2009 film, but while that film was hampered by setup and backstory, it’s addled by too much circumvolution and plots within plots. It’s great to see how it intertwines with longstanding Trek lore, making connections that hit with sudden realization and nostalgia, but I’m not entirely convinced all the plot threads that begin here tie neatly into the Trek future we already know.

At the core of Abrams’ brilliant rebranding, beyond the astute and well-measured use of high-powered special FX, is the inspired casting of Chris Pine and Zachary Quinto as the younger Kirk and Spock. They’re perfect mini-mes, but perhaps the most dead-on incarnation is Karl Urban as Bones. His inflection and mannerisms are uncanny to an eerie degree.

At the onset, the principals and crew of the Enterprise have yet to land their “five-year mission” gig. They get a test run, during which they can’t interfere with intelligent indigenous life forms. The mission leads them to a wondrous planet bristling with red trees and inhabited by alabaster humanoids with big black saucer eyes still at the spear and papyrus stage, and Kirk, in trying to save them and Spock from a catastrophic volcano eruption, exposes the Enterprise to the Neolithic newbies who have a “Chariots of the Gods” moment and embrace the iconic space vessel as a deity.

Back on Earth, Kirk has hell to pay for the violation, but a terrorist bombs Starfleet’s archive in London and subsequently attacks HQ in San Francisco. Kirk’s transgressions are a sudden non-starter as the man behind the sabotage turns out to one of Starfleet’s own – with the malcontent gone rogue, James Harrison (a menacing Benedict Cumberbatch) being no ordinary insider. He’s an expert in special weapons and all things Klingon and, for good measure, he has super blood to boot. (Just what that means, or to say any more, would trip the spoiler alert.)

A quick do sa do with Command and Kirk gets his ship back and goes after Harrison, who’s now holed up on an abandoned planet inside Klingon territory. It’s there that things become complicated and political, which might be redundant. Threads involving 72 suspect photon torpedoes, the destruction of the plant Vulcan and a hawkish admiral (a gaunt but game Peter Weller) champing at the bit begin to spin, and you can toss in the affable Mr. Scott (Simon Pegg, providing the necessary comic relief) too, as he gets a pink slip and becomes a barfly.

You can’t fault Abrams and his team of (three) writers for their ambition, but perhaps a bolder departure into the unknown might have yielded greater rewards. Overall the production is a tight ship, crisp and adrenaline infused (which you can experience in Imax and 3-D, given your theater and flexibility of wallet). There is never any letdown, but there are so many last-second death cheats that by the time you get to Abrams’ warp-speed wrap-up you might be weak-kneed and needing a breather. The tempo’s off, and there could have been more quiet moments between the rocket shots to let the characters spar and evolve like there were in Abrams’ last go at Kirk & Co. The romantic spat between Spock and Uhura (Zoe Saldana) with Kirk may be the film’s biggest money moment sans special FX.

Perhaps what the budding wonder behind the camera needed was a gentle reminder that this is James Kirk we’re playing with, not James Bond.