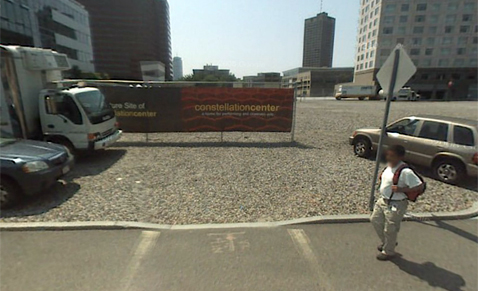 Constellation Center, once expected to open in 2005, remains a gravel field in the heart of Kendall Square. (Image: Google)

The City Council is out of patience with Constellation Center, the superlatively designed, acoustically unmatched performance center in Kendall Square.

But it’s certainly not noise complaints that are trying the councillors’ patience – it’s the fact that there’s nothing going on at Kendall and Athenaeum streets at all. The center seems no closer to being built than it did in June 2010, when in lieu of the incredible, sophisticated four-stage, two-organ music and film utopia described by founder Glenn KnicKrehm, the city got public art installations in a massive field of granite.

When conceived in 1996, the center would easily be considered the gem of Kendall Square, and as recently as 2009 councillors saw it as aiding in the square’s “revitalization.” But the area’s growth in recent years in top restaurants and residences and even a smattering of retail and entertainment makes the empty lot more a focus of frustration than a point of promise.

“Really, enough is enough,” said councillor and state Rep. Marjorie Decker, thanking Tim Toomey for his order asking the city manager for an update on the project. “It was maybe eight years ago that I went over there and did a tour to see what the possibilities were, and I still get these glossy, expensive brochures in the mail – and there’s this pretense of the sculpture garden.”

She wouldn’t be surprised, she said, if next year or five years from now the empty property was flipped to a developer “for a huge profit and all these years we were missing out on tax dollars that should be going to this community.”

An architect at the Constellation Charitable Foundation said Tuesday that was not the case.

The foundation was aware of Toomey’s order and preparing a response, said Scott Winkler, an architect at the 161 First St. foundation. The response would be sure to hearten councillors and residents: The research phase ended last year, and KnicKrehm and his group are in what’s hoped to be a three-year fundraising effort to be followed by three or four years of construction. That suggests an opening in 2020.

In 2002, KnicKrehm told The Boston Globe’s Geoff Edgars that he expected the center to open in 2005. When 2005 came around, he said it had been “delayed for … design changes.” He asked for and got zoning relief from the council in June 2007 to match his vision for the center at the time.

KnicKrehm, who can be difficult to get in touch with and evasive about progress, gave an extensive interview in July 2010 to Simon van Zuylen-Wood for the Cambridge Chronicle that revealed an exhaustive and microscopic level of detail in the planning of the center. The polymath who once founded and led local management, investment and consulting firms said his research team had been to more than 900 performance spaces around the world for research, was working in a spherical sound lab to analyze even what performance halls would sound like “when nothing happens”and bought a 3,000-pipe organ and planned to build another modeled after one in Naumburg, Germany – even “hired a traffic pattern expert to oversee a study on the ratio of men’s rooms to ladies rooms” before abandoning the exercise.

Winkler said the site itself put great demands on the designers. “It’s a fairly tight site for the amount of programming we’re putting on it,” he said.

Asked about the center’s progress in December 2011, the Kendall Square Association’s executive director at the time, Travis McCready, acknowledged that he was asked constantly about it.

“The community and everyone is waiting for some sign that the project is real. He’s done incredible amounts of work and stuck to his guns about designing the building from the inside out. I give him credit for being sort of an iconoclast about how that building gets built,” McCready said, “but I also would be lying if I didn’t say that virtually every community or representative from every walk of life that I encounter is waiting for some sign that that project will get built.”

McCready suspected KnicKrehm was having trouble gathering the money needed to build the center, which was put at $85 million in 2007, of which about $35 million had been raised, KnicKrehm said. But the center’s website now puts an “early projection” of its cost estimate at $100 million and says about one-third of that money has been raised – meaning the fundraising has lost ground in a half-dozen years.

“The cost of the project [has changed]. It’s a very different project than it was at that time,” Winkler said of the previous estimates.

The total cost of Constellation Center now is expected to be between $215 million and $300 million.

Foundry could be faster

“I hope they’re listening,” said Decker before the vote, referring to staff at the foundation.

Heather Hoffman, an East Cambridge resident who once supported the center as a potential home for the North Cambridge Opera Company, said Monday that she’d begun looking at the Foundry building instead – although that project, of which 10,000 square feet must be set aside for community use, also has been languishing. The city took ownership from Alexandria Real Estate Equities in January 2012, but any use of its 52,000 square feet (barring a one-off use allowed for Saturday) seems far off.

“In addition, if we have arts in the Foundry building that will also be an encouragement, because that will provide a feeder. The Foundry will be aimed at a level of wealth slightly lower than the Constellation Center. Even though it’s nonprofit and he’s going to keep tickets as low as he can, he still has to keep the lights on and all that,” Hoffman said, “once there are lights to keep on.”

This story was updated June 18, 2013, with comments from the Constellation Charitable Foundation.