Same-sex marriage in Massachusetts begins May 17, 2004, as the first applications for marriage licenses for same-sex couples are issued at Cambridge City Hall. (Photo: John Niedermeyer)

Tonight Cambridge celebrates the defeat of DOMA – the infamous Defense of Marriage Act that put federal barriers in the way of couples married in states recognizing same-sex marriage.

The Supreme Court voted 5-4 on Wednesday to strike down the 1996 law and its federal tax, retirement and immigration benefits impacts. The case that won was United States v. Windsor, named for Edie Windsor, 84. When her partner, Thea Spyer, died in February 2009, she was left her estate. They’d been together since 1963 and married in Canada in 2007, and their marriage was recognized in their home state, New York.

Still, Windsor was asked to pay more than $363,000 in federal estate taxes, “which she wouldn’t have had to pay if she were part of an opposite-sex couple,” said Chris Ott of the American Civil Liberties Union, the organization that brought Windsor’s case to court with the New York Civil Liberties Union and the law firm Paul, Weiss, Rifkind, Wharton & Garrison.

“This law violated the fundamental American principle of fairness that we all cherish,” Windsor said last year. 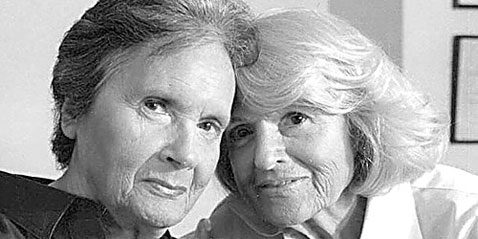 Edie Windsor, right, became lead plaintiff in the fight against the federal Defense of Marriage Act after her spouse, Thea Spyer, died in February 2009 and left Windsor her estate.

But no more, and along with striking down that law, the Supreme Court issued a ruling on Hollingsworth v. Perry – known as the Prop 8 case – and overturned the California ballot initiative limiting marriage to opposite-sex couples.

“We pioneered marriage equality here almost 10 years ago. This is important for Massachusetts because people who’ve been married here since then now have to be treated equally in federal law,” said Ott, who planned to attend the celebration at City Hall, site of a first step in marriage equality: the May 17, 2004, marriage of Marcia Kadish, 56, and Tanya McCloskey, 52, of Malden – the first legally married same-sex partners in the United States.

City Hall opened its doors the evening before so they could begin handing out same-sex marriage applications after midnight, when they become legal. At the stroke of midnight, thousands of people broke into cheers as then-City Clerk Margaret Drury – who later called this her proudest moment as clerk – and Deputy City Clerk Donna Lopez issued the first marriage license applications to gay and lesbian couples.