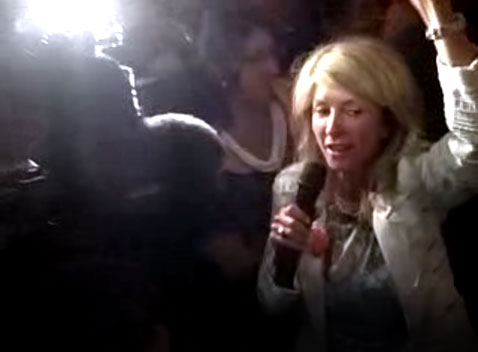 Anyone watching television or even reading legacy media such as The New York Times online last night probably missed out on some of the most riveting and alternately infuriating and inspiring political action imaginable. Anyone using social media very likely saw it: the filibuster attempt by Harvard Law grad Wendy Davis, a Democratic state senator in Texas, against a restrictive anti-abortion law that would have left only five abortion clinics in the entire 268,581-square-mile state.

When the parliamentary rulings seemed to go against Davis, ending her filibuster before midnight and allowing the vote to go forward, fellow Senate Democrats – including one who’d come from her father’s funeral – stepped in to slow the clock. And when that too failed, the crowd of orange-clad Texans gathered at the rotunda in support literally screamed until midnight had come and gone, drowning out attempts at action below and ending the Senate session.

That was more than 10 minutes of screaming.

If you can’t imagine being out of your mind with tension while following a bunch of Twitterfeeds, well, you weren’t watching. The livestream was surely even more incredible.

Trying to follow the story on traditional media was frustrating, though – a waste. The networks basically ignored this “West Wing”-worthy drama even as the YouTube feed surged up to nearly 200,000 watchers (at midnight) and Twitter trended with the hashtags #SB5 (the name of the Senate bill) and #StandWithWendy. Like our terrorist tale of April 18-19, stories like this have become ideal for social media.

It goes even further: Over Davis’ nine or so hours of filibustering, fresh testimony for her to read to the Senate came to her over the Internet, and it was crowdsourcing of the Senate rules that gave Texas Democrats the information they needed to challenge Republicans and keep Davis’ efforts alive.

Before the night was done in California, The Hollywood Reporter was already live with a story headlined “CNN Mocked for Lack of Texas Filibuster Coverage,” with Fox and even progressive-leaning MSNBC lumped in.

Legacy media was without question one of the big losers of the night, just as surely as Davis, 50, was a huge winner. She was unflappable, unfaltering, unfailingly strong and is an immediate front-runner for Texas governor. Republicans tried to turn up the heat on her over 11-plus hours and wound up just giving her a very bright spotlight.

How to lose with a win

That’s why the other big loser may be only barely open for debate. Even though the Republicans agreed at 3:51 a.m. (Cambridge time) that no vote had been legitimately taken – after nearly four hours of arguing the bill had somehow been passed – Republican Gov. Rick Perry can call the Senate back to a special session and make the politicians do it all over again.

But there’s little doubt Texas Republicans lost late Tuesday and early Wednesday, falling hard and likely taking even more of a GOP chance of revival at the midterms with them.

With even many Republican women in Texas a part of the #StandWithWendy crowd, the world watching and the Internet recording, the Republican Senate majority: 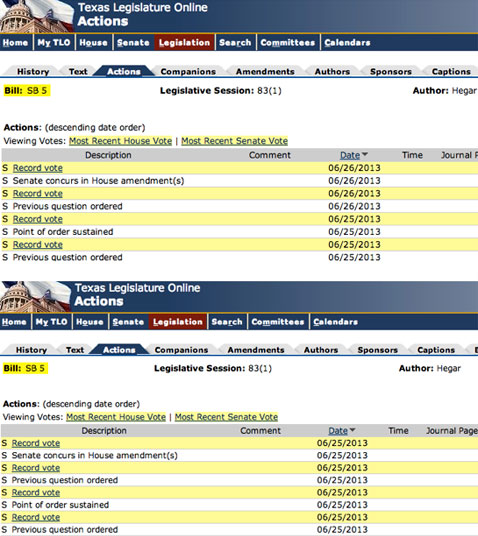 “Texas: Where rules don’t matter and laws are changed with a mouse click,” tweeted a user identified as Benjamin Raab.

“Clearly, the Texas Senate has no idea how the Internet works (in addition to things like time, the female body, etc.),” tweeted a user identified as Kat Perez-Fraga, as the nonprofit Texas Tribune and others sent screen captures and links to the manipulated Senate record. Four actions had been posted as taking place on Wednesday, including a vote in which the “Senate concurs in House amendment(s)” and a “Record vote” action; nine minutes later, all four Wednesday actions were changed to show they took place before midnight. 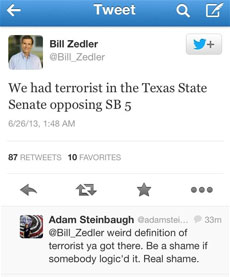 To top it all off, Republican state Rep. Bill Zedler sent a tweet that there had been “terrorist[s] in the Texas state Senate opposing SB5,” which brought nearly as much ridicule as the altered timestamps, despite him later deleting it. (Lt. Gov. David Dewhurst blamed the GOP loss on “an unruly mob using Occupy Wall Street tactics.”)

Perry can call the Senate back into session for a retake (and Dewhurst said he would); Republicans might even manage to get the votes they need. But this has surely changed the dynamic in Texas and hastened the already inevitable decline of a party that keeps talking about softening stances and reaching out to minorities, the middle-class and women and keeps throwing away opportunities with the sheer, shameless, thoughtless avidity of, well, an old jerk who doesn’t know he’s being watched while he lies, cheats and bullies.

One other sure thing resulting from this spectacle: If Perry does call the Senate back for an SB5 vote, even legacy media will be there watching, scared to miss out again.

That makes it a race to see who learns slowest: big, old media or the Grand Old Party.