Klosterman brings his latest, ‘I Wear the Black Hat,’ to Porter Square on Thursday 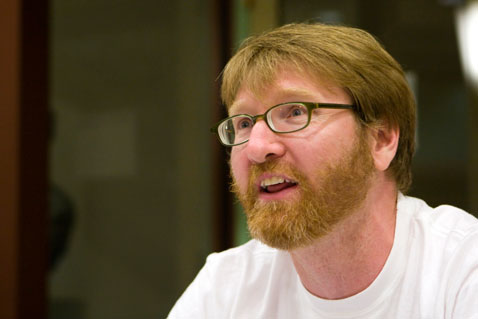 Klosterman brings his latest, ‘I Wear the Black Hat,’ to Porter Square on Thursday

Rock, sports and culture essayist Chuck Klosterman comes to Porter Square Books on Thursday for a reading from his newest, “I Wear the Black Hat: Grappling with Villains (Real and Imagined).” While also a novelist and mid-stint as The Ethicist for The New York Times Magazine, Klosterman made his name with clever and often counterintuitive think pieces on pop culture that he’s collected in three books going back to 2003’s “Sex, Drugs, and Cocoa Puffs: A Low Culture Manifesto.”

The newest isn’t a departure, and even has a sort of connection to his 2011 novel “The Visible Man,” which makes a villain the protagonist, and in an odd way to his position as arbiter of ethical behavior for the Times.

“All my books are really just … what I am engaged with at the time,” Klosterman told Lit Reactor’s John Jarzemsky. “This book is just what I’ve been thinking about as I get into my 40s … I think that the process of maturation makes a person more sympathetic towards ‘bad people.’”

The essays look at who we decide is a villain, with individual pieces putting microscopes on phenomena ranging from Bill Clinton and Monica Lewinsky to “Star Wars,” Bernhard Goetz and Batman, the Eagles and O.J. Simpson., Muhammad Ali and Joe Paterno.

Porter Square Books’s own take on the volume tells it well:

Chuck Klosterman has walked into the darkness. As a boy, he related to the cultural figures who represented goodness – but as an adult, he found himself unconsciously aligning with their enemies. This was not because he necessarily liked what they were doing; it was because they were doing it on purpose (and they were doing it better). They wanted to be evil. And what, exactly, was that supposed to mean? When we classify someone as a bad person, what are we really saying (and why are we so obsessed with saying it)? How does the culture of deliberate malevolence operate? …

Masterfully blending cultural analysis with self-interrogation and imaginative hypotheticals, “I Wear the Black Hat” delivers perceptive observations on the complexity of the antihero (seemingly the only kind of hero America still creates). “I Wear the Black Hat” is a rare example of serious criticism that’s instantly accessible and really, really funny. Klosterman continues to be the only writer doing whatever it is he’s doing.