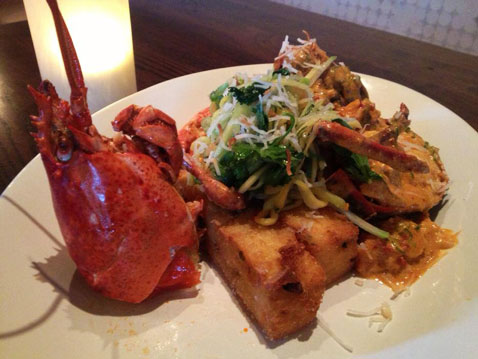 Among the dishes raising The Menotomy Grill & Tavern above the typical pub: grilled lobster seasoned with red curry and coconut.

A miracle has come to Arlington! For years, Arlingtonians have been yearning for a good pub/tavern to open here. The Menotomy Grill & Tavern is making that dream come true. In the former location of a video store along Massachusetts Avenue near Route 16, Billy Lyons has built a spacious, inviting restaurant that will please a wide range of customers.

Lyons has a long history of opening restaurants in the Boston area, including Starters, a Boston sports bar. His vision has evolved over four years of thinking about what he would want in a perfect restaurant, and Menotomy Grill is the manifestation of that.

Every detail, from the décor and menu to the food preparation and staff, has Billy’s imprimatur. While we were there, we observed him tending to every facet of the management of the tavern. This is his baby, and he wants it done right.

There are about 150 seats in the restaurant area, 24 more at the bar and several outdoor patio tables. Some of the features of this unusual space are a large fireplace, exposed wood ceiling and copper backsplashes in the bar area.

Seating is a mix of booths, tables, banquettes and bar stools. Wood dominates the décor with hardwood floors, polished solid wood tables and wooden area dividers. Lighting is pleasant, creating a peaceful ambiance. Noise is an issue because of the open kitchen and hard surfaces, but they are aware of it and thinking about improvements already. Another benefit of the location is the ample free parking, in the lot and on the avenue.

We tasted a range of dishes, from appetizers to dessert.

The soup of the day was cream of roasted cauliflower. It really surprised us, as we are not major aficionados of the vegetable. The rich flavor came from the roasting of the cauliflower, rather than from cream usually associated with this soup. It actually had no cream and just a little butter and was quite healthy. It was topped with tiny mushrooms.

The Bibb salad has arugula, endive, radishes, bacon and is lightly dressed with a bacon vinaigrette. It was excellent: The greens were extremely fresh and the blending of flavors created the perfect salad.

The shrimp and jalapeño fritters were very light and fluffy with a crisp exterior. The flavors came through and were complemented by an aioli dipping sauce.

The cayenne-and-vinegar chicken wings were medium hot with a flavor profile that was tangier than your typical buffalo wings. They are mildly smoked, but the cayenne sauce dominated the dish. It came with a very good ranch dipping sauce.

The hummus appetizer was thick and garlicky, and served with crispy brown homemade pita chips and marinated olives. It was a good basic version of this popular dish and would please any crowd.

The menu has a section of side dishes that can be shared by the table. They include green beans, several potato dishes, brussels sprouts and a sausage potato stuffing.

The sausage-and-potato stuffing, usually served with the roast chicken, is a hash of house-made pork sausage and potatoes cooked until crispy. We devoured this and will order it again.

For main courses, we had salmon and steak tips. The salmon was pan-fried with a pistachio gremolata over a parsnip purée, served with parsnips and green beans. Ordinarily, the salmon comes with Swiss chard, but the staff was happy to accommodate Linda’s wish for green beans. It is not easy to prepare salmon in this fashion, but the end result was a crispy top and a soft, moist interior. It was outstanding. The parsnip purée was masterfully prepared and had the texture of creamy whipped potatoes.

The steak tips were marinated in a chimichurri sauce, which is a great take on this common tavern dish. Menotomy Grill uses very high-quality cuts of steak, and they were perfectly grilled to Uri’s liking. Its standard side is parmesan herb french fries, but Uri really wanted to try the gratin accompanying the special of the day. It was a manchego potato gratin, which was creamy with a crispy top, and Uri believes it should be on the menu, rather than being a special. This was another example of the flexibility of the staff when it comes to substitutions.

Other menu items are pulled-pork sandwiches, burgers, roast chicken and grilled steak. It has something for everyone, and we will be exploring it in future visits.

The dessert menu was limited to two choices, but we were very pleased with both. Linda had the chocolate bread pudding with Oreo ice cream, and although she tried to manage her carbohydrates and fat, she did not succeed completely. Nevertheless, it was well worth it.

Uri had the peach blueberry cobbler with vanilla ice cream. The blueberries were huge and loaded with flavor. The warm peaches offset the tartness of the blueberries, creating a real flavor sensation.

For a restaurant that has been open to the general public only since June 10, staffers are already outdoing themselves. Service was friendly, and our dishes were served hot and quickly. We had a reservation on a Tuesday night, and the place was packed. Make sure you have a reservation for weekend dining or be prepared to wait an hour or more. The tavern is already very popular, and looks like it will stay that way.