‘The Hunt’: The molestation charge is made up, but the mob out for justice is real 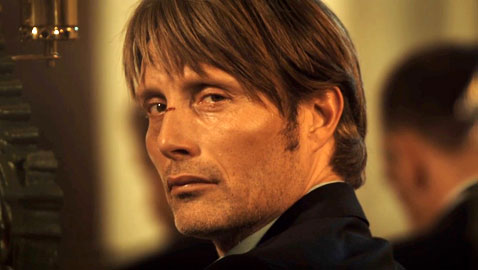 ‘The Hunt’: The molestation charge is made up, but the mob out for justice is real

If you’ve seen Sam Peckinpah’s masterfully macabre “Straw Dogs’’ (let’s all please agree to forget the far inferior recent remake) you’re already up to speed as to what goes on in “The Hunt” – a quiet European hamlet, a mindful and reserved intellect with a complex past, slow constant simmer, sexual tension, strong reactions based on false assumptions and a gentlemanly hunt in the woods serving as a ruse for a deeper, more perverse game. 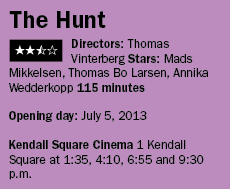 And while the arc, ambiance and elements of the films bear many similarities, the context and articulation could not be further apart. Mads Mikkelsen, whom most U.S. viewers know as Hannibal Lecter in the self-titled NBC TV series or the European badass who bashed in Bond’s balls in “Casino Royale,” plays Lucas, a quiet man trying to gain some degree of custody of his teen son in the aftermath of a bitter divorce.

As a caregiver/instructor at a nursery school, he’s pretty well liked and respected by his peers and his charges – some perhaps a little too much. The towheaded Klara (Annika Wedderkopp) takes his kindness  for something more and, after a failed furtive kiss that Lucas quickly and sternly rebuffs, she becomes angry and tells her parents (who happen to be Lucas’ best friends) and the school head in vague terms that Lucas did something to her. Later, after Klara catches a glimpse of smut on her brother’s iPad and the adults try to further educe from her what exactly transpired, it takes only a few dark slanted inferences for the toxic charge of pedophilia to erupt.

The film, directed by Dane Thomas Vinterberg (“The Celebration”), a Dogme 95 compatriot of Lars von Trier, makes good use of its remote setting – a town where justice is administered by elected elders and enforcement, when needed, comes from somewhere afar. So as the rumor billows and emotions flare and there is a heated call for immediate action, vigilante retribution begins to rain in on the accused. Lucas’ son stands by him, as does his new girlfriend, an immigrant cafeteria worker who’s fearful of losing her job and being deported, but in the end Lucas must stand alone against the amassing throng – and boldly so, not unlike Dustin Hoffman’s nebbish in Peckinpah’s bloody classic.

Quibbles about “The Hunt” can’t be put onto Mikkelsen or any of the actors, who are sharp and heartfelt in their roles. Mikkelsen’s rendering of internal turmoil, malaise and depressed entrapment, dutifully echoed by the grim, washed-out primal atmosphere etched by Vinterberg, drives the film with purpose, but the logic and the obvious questions not asked by normally rational minds undermines the overall effort. The premise of a town turned inward by accusation and mob justice is a powerful one. It’s just too bad Vinterberg didn’t bring a more spirited dog to the fight.