‘The Wolverine’: It’s claws against ninja blades, without losing the human touch 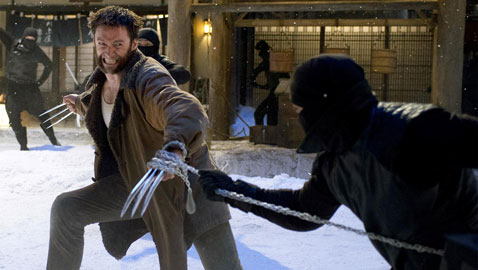 ‘The Wolverine’: It’s claws against ninja blades, without losing the human touch

The Wolverine onscreen always was the most intriguing of the X-Men lot. As an enigmatic outsider with a tortured past and taciturn persona he had character and depth, something few of the skimpily sketched circus anomalies in Professor Xavier’s menagerie could offer. If you draped a poncho across his back and put a six-shooter in his hand he’d not be unlike a young Clint Eastwood in Sergio Leone’s “Man with No Name” trilogy. And now that I come to think of it, the man who plays Logan (a.k.a the Wolverine), Hugh Jackman, and Eastwood, thought of at a similar age, look and sound somewhat alike. I’m not sure if their politics or tastes in furniture are akin, but that’s beside the point. 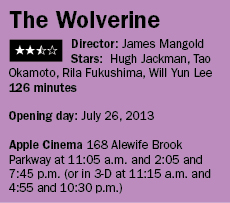 Given the “cool” factor, it’s no surprise that the immortal mutant with a metal-reinforced skeleton and rapier-sharp retractable blades in his wrists got his own franchise. The first installment, “X-Men Origins: Wolverine” didn’t exactly wow, but backstory up ’til “last we left off” tends to do that. Here in “The Wolverine” we’re post the last X-Men chapter (”X-Men: The Last Stand”) and Logan is living (and looking) like a vagrant in the Yukon and depressed about the death of his beloved Jean Grey (Famke Janssen, who comes to him in dream sequences). He’s got a grizzly bear as neighbor, but before we get to all that, there’s the important rewind back to Nagasaki during World War II when Logan saves one of his captors from “the bomb.” That benefactor went on to become a wealthy industrialist and now, on his deathbed, would like Logan to pay him one final visit.

What’s the best way to get the Wolverine to come see you? Send a schoolgirl with ninja capabilities and a lot of sass. And that’s exactly what happens. No one, and it’s all grizzled men in the near-arctic township, seems to take exception to the pixieish Yukio (Rila Fukushima), lithe and red mopped with popping cheekbones, until, in a seedy bar, she unsheathes her samurai sword and lets them all know she’s no cute plaything. That’s enough to get Logan to Tokyo, where Yashida (Haruhiko Yamanouchi) has ulterior plans for the feral mutant. In the simmering kettle of arcane machinations there’s a plot afoot to assassinate Yashida’s daughter Mariko (Tao Okamoto), his oncologist (Svetlana Khodchenkova) looks freakily like a Victoria’s Secret model and there’s always some guy running along the rooftops with a bow and arrow in hand.

Yes there are other mutants in the game. Yukio it seems (and fuzzily so) has the power to foresee, and there’s Viper, who has a nasty tongue and then some. But mostly this is a lovers-perhaps-to-be on-the-run movie, as Logan and Mariko take flight to the now tranquil harbor of Nagasaki. Double dealings come at them from all sides, and to make things interesting Logan loses half of his powers.

James Mangold, who has done everything from “Walk the Line” to “Copland” and “Knight and Day,” smartly delves deep into the human element. Jackman’s given more to work with since the last busy outing (loss and love) and the two women, while sleek and elegant eye candy, harbor both vulnerability and intrepid pistons behind their reserved exterior. Mangold, going back to “Heavy” has always had an eye for rich female characters, and while Khodchenkova’s bedside floozy is razor thin, the sisterly pair are complex and compelling. But this is a summer movie and a blockbuster franchise at that, so there must be the crash-crash, bang-bang. Plenty of that comes, and sometimes confusingly so. Logan’s final challenge inside a Yashida corporate stronghold is noisy, long and predictable, but thankfully after that, there is a quieter, more revealing moment. One that reveals and charms. To be continued, I’m sure.