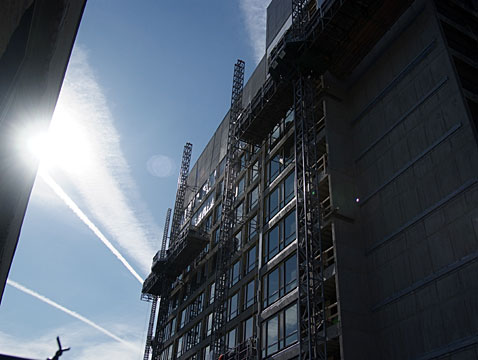 Scaffolding went up during the revitalization of Lyndon B. Johnson Apartments on Erie Street, where some subcontractors missed hiring goals.

Fourteen subcontractors on a $32.5 million project to renovate a public housing project in Cambridgeport didn’t meet goals to hire nonwhite and women workers, but because of administrative missteps they won’t be penalized.

The Cambridge Housing Authority will pay the companies $79,600 it was withholding because of failure to meet the requirements, a move approved by the authority board at its Tuesday meeting.

The mistakes occurred after the general contractor on the Lyndon B. Johnson Apartments redevelopment on Erie Street, Skanska USA Building, took over monitoring of compliance. An authority employee had overseen the requirements during the first half of the project, but she left and Skanska assumed the job.

“Unfortunately, CHA did not fully review” Skanska’s work “and subsequently discovered that the data was not properly recorded for each [subcontractor],” a memo to the authority board said. Some companies “were overpenalized” and others were not properly notified of their noncompliance so they could try to achieve the goals.

Forgiving the penalties “is the only way to be fair to all the subcontractors involved in the program and to maintain the integrity of our [Equal Employment Opportunity] program,” the memo said.

From now on the authority will do the monitoring in-house, Deputy Executive Director Michael Johnston said.

Subcontractors were required to try to employ nonwhite workers for at least 20 percent of job hours on site, and women for 10 percent. A report provided by the authority showed that of the five companies with the most hours, four exceeded the goal for minority workers and three for women employees. Two met both goals – a roofing contractor and an electrical contractor.

One of the top five companies, a heating, ventilation and air conditioning contractor, did not meet either goal, with only 2 percent of 10,230 worker hours going to nonwhites and none to women.

A total of 32 companies worked on the project. Of those, a dozen did not employ any minority or female workers, according to the authority. Most of those subcontractors had less than 1,000 labor hours; one, a sheet metal firm, accounted for 3,395 hours.

Because of the compliance by the larger firms, more than 29 percent of the hours on the job site went to minority workers and more than 5 percent to women.

It’s not unusual for the authority to waive penalties or exempt companies from the requirements. Johnston said that of 30 contracts since 2010 that were subject to the requirement, only four companies fully met the goal. Of the 26 that didn’t comply, nine weren’t penalized, six were exempted and 11 paid a total of $156,000 in penalties.

The wholesale forgiveness of subcontractors on the LBJ project, though, is “a one-time exception,” he said.

“Bottom line, we place a high priority on these goals,” Johnston said.

Companies aren’t docked if they can show they made “good faith efforts” to meet the goals, Johnston said. They may be exempted if they employ only one construction trade, have fewer than two employees on site, were hired on an emergency basis or have a contract worth less than $50,000, he said.