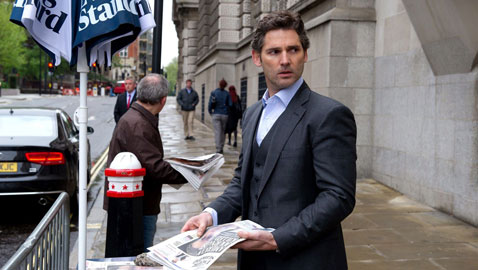 This is a deft, thinking person’s thriller from the team of producers behind 2011’s “Tinker, Tailor, Soldier, Spy.” Clearly they know intrigue, though “Closed Circuit” is less of a brain boggle than the Cold War chess game based on the John le Carré novel. Based on real events, it’s never a street brawl either, though plenty of blood is spilt – mostly offscreen. London is rocked by a massive terrorist attack that kills more than 100 innocents. The means of mayhem is nothing special: a truck full of explosives is parked in front of an open market and triggered, suicide style. What is special is the fact that the mastermind is so easily caught. 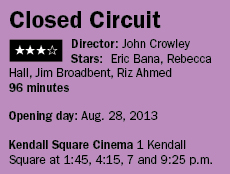 The rub comes during the staging of the trial. The Crown, for security reasons, wants a closed hearing due to sensitive “secret evidence” that could put the public safety at risk – or so that’s the line being toed by the attorney general, played by a slimmed-down James Broadbent as an avuncular and creepy puppet master. As the trial gears up, a nosy defense attorney (James Lowe) commits suicide by jumping from a tall building. His replacements don’t buy the unhappy-gay story circulating in the rumor mill and begin to poke around too, but they have other challenges to contend with. Martin (Eric Bana) and Claudia (Rebecca Hall) have been romantically involved. It wrecked his marriage, and if a trace of their involvement is evident they will be booted from the trial. To complicate matters even more, the two can’t communicate during the closed-session segment of the trial and only Claudia, as the special advocate with classified clearance, can look at the secret evidence.

It sounds more convoluted on paper than it plays up on the screen. Director John Crowley (“Boy A”), artfully imbues tension and peril into every scene. When Claudia is presented the secret evidence by Nazrul (Riz Ahmed), a boyish agent with dangerously dark aspects, she questions how he got into her sealed office. He calmly tells her the door was open when he got there, but she knows that’s not true, and from that moment on she and Martin know MI5 is likely involved and that a coverup or conspiracy could be in play.

Bana and Hall play off each other well and do an effective job portraying the integrity of their government attorneys as well as their introspection and resolve when on the lam. You’re so ingrained into their thinking and plight that there are times, especially with Bana’s Martin, that you begin to question whether he’s slipped a gear and fallen into pure paranoia. As with the Bourne films, there’s surveillance everywhere (Crowley uses the security cam POV a lot, one of many layered meanings within the film’s title) and the busy streets are a maze where unassuming pedestrians and loiterers can leap out as would-be assassins.

Much to Crowley’s credit, the many twists and turns are handled with clarity even as the film clicks along, ever agile and spritely under the menacing pall. The editing is tight and key, as are bit players such as Broadbent and Ahmed, who sells with ease both sides of his loyal foot soldier willing to do anything to protect the Crown. Also quite good is Anne-Marie Duff as a transportation secretary, but not so for Julia Stiles in the flimsy role of a New York Times reporter working the London desk. She further underscores the Bourne-like essence, though “Closed Circuit” stands up on its own and rightfully so. Crowley has toiled at his craft for some time in relative obscurity; “Closed Circuit” is about to change all that. Let’s just hope Hollywood doesn’t change him.