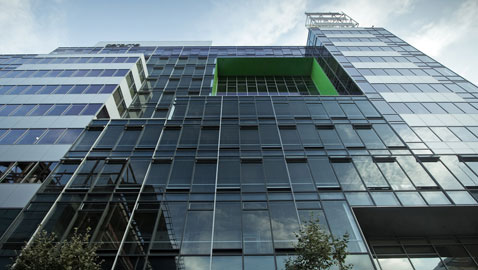 On behalf of the Cambridge Committee for Net Zero Buildings, I want to thank everyone who participated in last week’s opening round of public hearings on the Connolly petition, our citizen zoning amendment to promote renewable energy alternatives in the operation of large, new buildings in the city.

The third week of August might have seemed an unlikely time for officials to take up an important policy initiative, but as North Cambridge resident Charles Teague told city councillors last week: “We’re on the clock, because the climate is on the clock.”

At Tuesday’s Planning Board hearing, more than 30 residents signed up to testify during public comment, forcing the board to ask people in the standing-room-only crowd to cut their remarks to two minutes apiece.

In the end, 75 percent of those speaking expressed support for our proposal, but the board didn’t have time to begin deliberations. Another meeting is being scheduled, possibly for Sept. 17.

The following afternoon, backed by another standing-room-only crowd, we made the case for net zero emissions to members of the City Council’s Ordinance Committee at City Hall.

Joining our presentation team on Wednesday was state Sen. Will Brownsberger, who told the councillors, “This petition is focused on exactly the right issue.”

“We need to be going very far to reduce our emissions from new buildings,” Brownsberger said.

After all, Cambridge is in the middle of a great building boom, and building operations account for 82 percent of our city’s greenhouse gas emissions.

“So if we’re going to come anywhere close to achieving the reductions that we are aspiring to achieve statewide, we need to be going very far toward reducing emissions from new buildings, because new buildings are going to be here for a very long time,” Brownsberger added.

This sentiment – that we need to act now to reduce emissions – was echoed by School Committee member Patty Nolan, who spoke during Wednesday’s lengthy public comment period.

“I see this discussion as a reality check, because the current path we’re on will not get us to our goals,” Nolan said. “Let’s remember that the goal of a 20 percent reduction from 1990 levels, which was in the original 2002 Climate Protection Plan, was not met.”

The realization that construction has been thwarting our progress on emissions goals helped spur the City Council to declare a Climate Emergency in 2009.

Many speakers at Wednesday’s hearing lamented that bold action to cut emissions has remained elusive, despite a communitywide Climate Emergency Congress that included various institutional stakeholders in 2009 and 2010.

“I view this as putting the Climate Emergency back on the table, and I’m really glad that we’re doing this,” said councillor Minka vanBeuzekom at the tail end of Wednesday’s hearing.

Not everyone has signed on to our proposal to restrict emissions from new buildings.

These are very important concerns, but before anyone concludes that our proposal is too bold for Cambridge, we need to make sure that everyone is talking about the same thing.

Critics of our proposal have focused generally on net zero energy, the absolute strictest of efficiency standards, whereby new buildings are designed to produce all of the energy they consume.

Our proposal calls for something far more flexible.

We recognize that in Cambridge, with our focus on smart growth and transit-oriented development, it does not make sense to require every new building to generate all of its own power.

So we are calling for something different: We start by asking developers to strive for net zero energy, but we set the bottom line in a far more flexible place called net zero emissions.

To achieve net zero emissions, building operators can tap into affordable, off-site sources of renewable energy. In Kendall Square, the 350,000-square-foot Genzyme Center has sourced 100 percent of its electricity from off-site renewables for a number of years, and reports indicate that this arrangement has actually saved the tenants money.

In the coming weeks, we look forward to working with all stakeholders to build support for our proposal.

If we work together and focus on all available options for managing our carbon footprint, we will be able to adopt a standard that makes sense for Cambridge – one that allows us to continue with our policy of growth without walking away from the need to cut emissions.