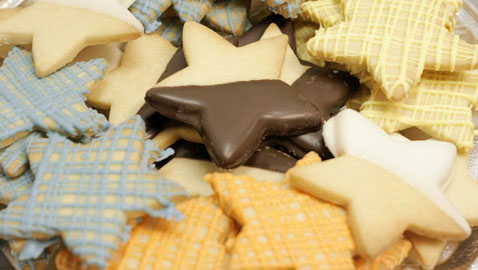 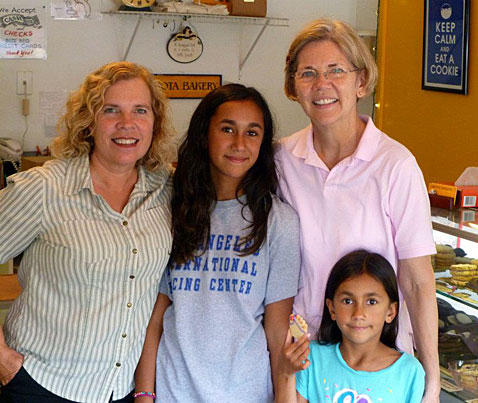 Elizabeth Warren, then a candidate for U.S. Senate, came by Arlington’s Lakota Bakery in August 2012. On Labor Day, the bakery expects a visit from another politician.

State Sen. Katherine Clark has planned a visit to the kitchen to talk about the business’ wages, which are higher than the state minimum.

The delicious but pricey cookies tempting you around Cambridge – including at Cardullo’s in Harvard Square, Pemberton Farms in North Cambridge and S&S Restaurant in Inman Square – all come from Lakota Bakery in Arlington, a Massachusetts Avenue retail shop and kitchen near the Lexington border.

That’s where Democratic state Sen. Katherine Clark, of Melrose, is headed Monday for a Labor Day tour of the kitchen. Not because she wants cookies – the shop isn’t even open, which is sort of the point.

“The owner, Barbara Weniger, gave her employees the day off because she feels it’s important to give them paid holidays. The owner will be showing Sen. Clark around and talking about the importance of taking care of her workers,” said Alex Bloom, spokesman for Clark’s campaign to win Ed Markey’s seat in the 5th Congressional District.

Even more specifically, Bloom said, is that Weniger pays her workers “well above the minimum wage,” a fact that resonates on Labor Day, as there are renewed calls for raising the federal minimum wage of $7.25 and even the higher Massachusetts minimum wage. An advocacy site, raisetheminimumwage.com, says the minimum wage would be $10.74 if it had kept pace with inflation over the past four decades.

The Clark visit is intended to to push a minimum wage increase and better family leave policies, Bloom said.

Massachusetts is one of 21 states (along with the District of Columbia) where the minimum wage is higher than the federal, according to the U.S. Department of Labor. And while it’s among the highest, it’s still far below Washington State’s pay of $9.19 an hour and Oregon’s $8.95; Vermont pays $8.60; and Connecticut, D.C. and Illinois pays $8.25; California matches the Bay State by paying $8 an hour.

Legislators are looking at raising the state’s minimum wage to $11 an hour by 2015, then keeping it adjusted for inflation. The last increase was five years ago.

“Raising the minimum wage is a great way to make sure people are able to support their families, able to afford good housing and actually be good consumers to pay taxes and put money back into our economy,” Clark said. 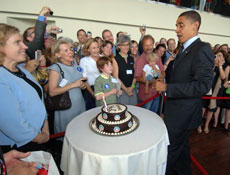 The bill, called S.878, has been referred to the state legislature’s Joint Committee on Labor and Workforce Development and awaits action. It has broad support from local legislators in addition to Clark, including Pat Jehlen, Anthony Petruccelli, Martha “Marty” Walz and politicians running against Clark in the Oct. 15 Democratic primary for the 5th District seat: state Sen. Will Brownsberger and state Rep. Carl Sciortino. State Sen. Karen Spilka has also campaigned as favoring a raise in the minimum wage. The final candidate in the primary is Middlesex County Sheriff Peter Koutoujian.

Weniger and her bakery are no strangers to politicians or politics. Cantabrigian Elizabeth Warren made an impromptu visit with two granddaughters during her run for U.S. Senate last year, and Weniger drew attention in 2010 as head of Bay State Future, a so-called 527 group that ran attack ads during the gubernatorial campaign and donated to the campaign of Deval Patrick and President Barack Obama. (She also made Obama’s cake when he celebrated his birthday in Boston in August 2008.)