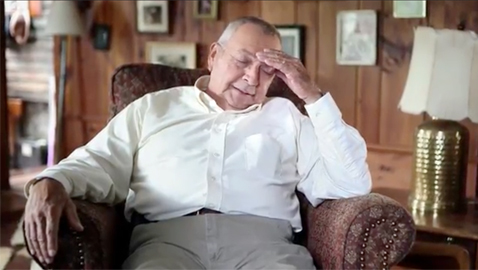 Candidate Carl Sciortino has found another way to stand out in the crowded field for Ed Markey’s 5th Congressional District seat – a television ad in which he comes out to his father.

It’s a funny ad that zigs where you think it’s going to zag: Sciortino comes out to his father as a liberal.

Carl Sciortino Sr. is a tea party conservative who, throughout the 60-second ad, can’t help but appear amused by his role in helping his son be elected to Congress to fight for gun control, abortion rights, tax reform, pay equity and “equal rights for, well, everybody.” It also runs quickly through some of the son’s accomplishments, including the health clinic buffer zone law that went to the Supreme Court.

“My father and I disagree on just about everything,” Sciortino said. “I am grateful that he was willing to appear in my TV ad even though he probably thinks he should be running against me.”

Sciortino recently and effectively made an point of opposing military intervention in Syria, inspiring other candidates in the nine-person scrum for the seat (three of whom are Republicans) to stake out their positions as well. In Massachusetts, and as a gay state representative for Somerville and Medford in the 34th Middlesex District, it’s to Sciortino’s benefit to run to the left. His logo boasts that he is “The Progressive Democrat for Congress.”

In terms of media coverage, the strategy is working. His cute television ad has racked up more than 100,000 hits on YouTube in a day and stories on Boston.com, Huffington Post and Gawker, while Buzzfeed Politics posted a lengthy piece on how Sciortino’s campaign really shows how “A New Playbook For Out LGBT Democrats Takes Shape In Massachusetts.”

The ad is winning fans, if not voters. YouTube commenter Jedediah Palosaari thinks it’s “like the best political ad ever,” and several Gawker readers marveled at the demonstration that there was still room for people to disagree politically but get along personally.

“Outrageous,” says a commenter identified as AndyFromTucson. “This ad makes it sound like it’s okay to disagree on public policy questions when we all know American politics is a LIFE AND DEATH STRUGGLE BETWEEN GOOD AND EVIL!!!”

Another, KristenfromMA, says, “Not my precinct, but if he wrote the buffer zone law I’m gonna have to kick him some money.”