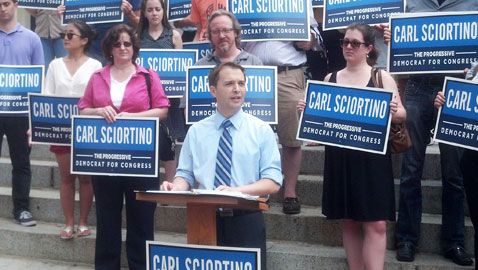 With less than three weeks to go until a Democratic primary for Ed Markey’s old seat in Congress, two polls of progressive voters are making Carl Sciortino look like a winner.

Those results can be picked apart a bit to make them seem less impressive, and they look downright wrong when compared with polling done for a rival candidate in the Oct. 15 primary for the 5th Congressional District – a seven-way Democratic scrum that, given the blue bent of the district, may just anoint a final winner despite the three Republicans running. The general election is Dec. 10.

Sciortino, a Democrat representing Somerville and his hometown of Medford in the 34th Middlesex District, continues to get plenty of press for the cute TV ad in which he “comes out” as a liberal to his tea party dad. 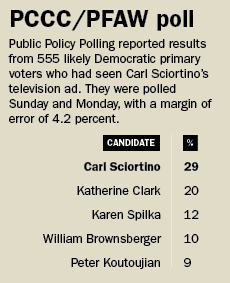 The Progressive Change Campaign Committee and People For the American Way polled 555 likely Democratic primary voters Sunday and Monday and said Wednesday that they found Sciortino had jumped to the favorite in the 5th Congressional primary from fifth place – or to 29 percent from 5 percent – among those who saw the ad last week.

In second place was Katherine Clark at 20 percent, giving Sciortino a safe lead in a poll with a margin of error of 4.2 percent.

The poll was conducted by Democratic-leaning Public Policy Polling, which a Fordham University study found to be the most accurate public opinion firm of last year’s election cycle.

The Progressive Change Campaign Committee has already endorsed Sciortino, but that’s not why the figures are slightly suspect – rather, it’s the cherry-picked nature of the poll itself, limited to people who’d already seen the ad. While Sciortino’s campaign said television ad buys have been increased (and the video had 347,071 views on YouTube as of this morning), that may be a somewhat self-selecting sample out of the hundreds of thousands of residents of the recently remapped district. Last year Markey won in the redistricted 5th with 71 percent of the 364,201 votes cast. 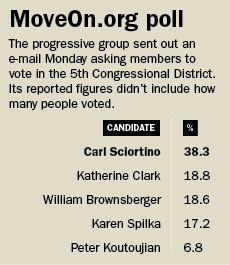 The second set of figures have far less reliability, being simply an online poll resulting from an e-mail sent out Monday by the progressive group moveon.org and reported Wednesday as showing that 38.3 percent of respondents favored Sciortino for the 5th, with Clark again showing up second with 18.8 percent of the vote. Missing from the results: any indication of how many people voted.

While more than twice as many MoveOn members voted for Sciortino as for any other candidate, the group’s Ilya Sheyman said, “in a multicandidate race like this one, MoveOn only endorses a candidate when at least 50 percent of members who participate in an official endorsement vote select one candidate. Because no candidate reached that threshold in this race, no endorsement is made.” 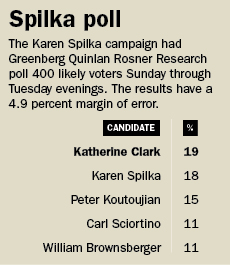 Sciortino doesn’t look quite so good in a three-day poll reported Wednesday done by Greenberg Quinlan Rosner Research for Sciortino opponent state Sen. Karen Spilka, an Ashland Democrat in the 2nd Middlesex & Norfolk District, which covers parts of seven communities in and around Framingham. This 400-person poll of likely voters with a 4.9 margin of error has Spilka at 18 percent, or second place – led only by the 19 percent showing of state Sen. Katherine Clark of Melrose. Clark’s 5th Middlesex District includes Malden and Melrose and the towns of Reading, Stoneham, Wakefield and Winchester.

In this poll, Sciortino doesn’t show up until fourth place, at 11 percent, which is still an increase from the fifth-place showing of previous polls and the zero percent of a Sept. 13-17 poll from Emerson College.