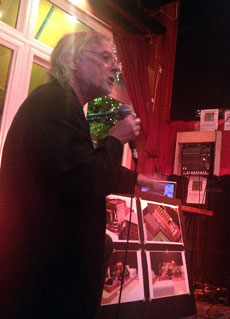 Architect William Schaefer gives a presentation Tuesday at The Middle East showing changes to a proposal for a retail and residential structure that would go overhead. (Photo: Marc Levy)

The owners of the Middle East restaurants and nightclubs in Central Square want 20 percent of the housing they hope to build overhead to be set aside for low-income tenants, they announced at a community meeting Tuesday, and they took audience suggestions from a previous meeting to specify some of their building’s second floor for arts-related uses such as an art gallery.

But as the Sater family and architect William Schaefer incorporate community wish lists into their mission to keep the legendary 472-480 Massachusetts Ave. rock club alive in the face of landlord demands, they’re also adding compromises.

The amount of affordable housing – the most promised by any developer in recent city memory – and use of second-floor space to buffer future residents from the sound of rock bands beneath is pushing the building’s roofline higher. The project would already have to go before city officials to get a waiver on the rule demanding one parking space per residential unit, and the need for more square footage could force the need for another break from the city: to go over the 80-foot height allowed by current zoning.

“It meets the restriction on height, though we’re going to be close,” Schaefer told the neighbors at the second meeting in two weeks. The potential for 14-foot ceilings on the second floor “is going to put us very close to 80 feet and possibly over.”

In another tradeoff, two residents urged the architect to design the building with step-backs as it rose so Brookline Street wouldn’t become an urban canyon with sheer walls on either side.

Something’s got to give

Schaefer warned that, in designing a building with such constraints, something’s got to give. “We’ve set back the front and back, but step-backs decrease our square footage and make it hard to do affordable,” Schaefer said.

Since starting as a Lebanese restaurant in 1968, The Middle East has been growing storefront by storefront with the oversight of landlord Emile DuPont. His death in 2009 changed the math, and now the Saters have first rights to buy the property from DuPont’s heirs for more than $7 million in the next two years “or the place will be gone forever,” Nabil Sater said. “With the support of the community … we’d like to keep this place and make a beautiful building that will be the pride of the neighborhood and continue to be a good place and a good restaurant.”

The family would own the ground-floor businesses and bring in a developer for the now five or six floors above and their mainly high-priced 50 to 100 residential units, Joseph Sater said. The money from the developer would help pay off the sale price and mortgage, “which we can’t afford” – but he noted that it’s impressive that the family has a shot at getting the property in the first place, considering the recent $18 million sale of property across the street.

“We made the area too nice for our own good,” he said to laughter from the audience.

Construction is estimated to cost another $7 million, with its own set of challenges that includes keeping the mural on the Brookline Street side of the building intact while building a structure that will support the floors above the Middle East (as well as the T.T. the Bear’s Place nightclub and Central Convenience minimart) while allowing the club to keep operating. Schaefer said it would take it would take at least $600,000 to reinforce the complex’s foundation and another $600,000 minimum to install 16 columns as infrastructure for the retail and residences that is safe from earthquakes and strong winds.

“And yes, my engineer says it will be very difficult,” Schaefer said.

The Saters and Schaefer were not sure when the proposal would be presented formally to the city, but said they were happy to be in communication with city councillors who seemed supportive of keeping the historical business intact. While the community meeting conflicted with a candidates forum in Porter Square, council challenger James Williamson was present for the start of the meeting, and incumbents Ken Reeves, Denise Simmons and Minka vanBeuzekom made appearances at the Oct. 1 meeting.

Community support could be even more important, Joseph Sater said.

“At some point we will be going to the city, and at that time we will need signatures and support,” he said.

More information about the project is here.