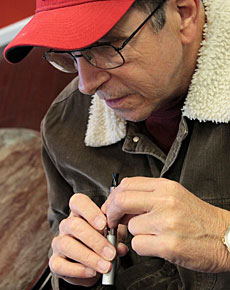 Public health experts worry that the tobacco industry is promoting unregulated e-cigarettes when their risks are unknown. (Photo: Amy Claxton)

The Cambridge Housing Authority’s controversial smoking ban is putting a new focus on electronic cigarettes, the increasingly popular cigarette lookalike that delivers nicotine in a puff of vapor.

The authority explicitly excluded e-cigarettes from the ban, which means tenants will be able to use the product inside their apartments and buildings and anywhere on the grounds. CHA officials also told critics who complained that the policy is too harsh that smokers can turn to e-cigarettes if they can’t get to an approved outdoor smoking area. And a memo on the ban asserts that electronic cigarettes cost less than conventional smokes on an annual basis.

Electronic cigarettes usually contain nicotine in a liquid that is heated to produce vapor that a user inhales. (Some e-cigarettes claim not to contain nicotine). Many public health experts worry that the tobacco industry, now a major producer of electronic cigarettes, is heavily promoting the unregulated devices when their risks are unknown. Tests have shown that the amount of nicotine they deliver can vary widely, and the federal government has found low levels of harmful chemicals, including suspected cancer-causing substances, in e-cigarette cartridges containing the liquid that is vaporized.

Use or experimentation with e-cigarettes among middle school and high school students doubled between 2011 and last year, to 6.8 percent from 3.3 percent, according to the U.S. Centers for Disease Control and Prevention, triggering more alarm among health officials.

Last year, “an estimated 160,000 students who reported ever using e-cigarettes had never used conventional cigarettes. This is a serious concern because the overall impact of e-cigarette use on public health remains uncertain,” the CDC said. In young people, e-cigarettes can lead to cigarette smoking, and nicotine can hurt teen brain development and result in addiction, the CDC said.

James Comer, the Cambridge agency’s director of property management who will enforce the public housing ban, said the authority “is not advocating” electronic cigarettes. After tenants raised the issue in meetings about the ban, CHA decided to allow e-cigarettes because they do not emit “secondhand smoke” that is dangerous to non-smokers, he said.

“Obviously there is emerging literature on what their impact is, but in terms of noxious smoke being put into the environment we don’t believe they’re contributing,” Comer said. They also might help people stop smoking, he said. Most other housing authorities that have imposed smoking restrictions, including Boston, also exempt e-cigarettes.

Although many online commenters say electronic cigarettes enabled them to stop smoking, research is conflicting. “Somebody going from cigarette smoking to using an e-cigarette does not necessarily break their addiction to nicotine,” said Lisa Montuori Trimble, Cambridge Health Alliance’s director of health promotion and community outreach. She echoed the CDC warning about nicotine’s impact on teenagers’ brains.

An aid to quitting?

Some of the attributes that appeal most to smokers – that the devices looks like cigarettes and feel somewhat like cigarettes when puffed – may interfere with quitting, Montuori Trimble said. “One of the things we coach people [who are trying to stop smoking] is to make smoke-free and nicotine-free places in their life,” she said. “The concern I would have with using e-cigarettes is they kind of take away that external motivator.”

Montuori Trimble is preparing at least six sessions to be held at CHA developments where Alliance speakers will tell residents about the impact of smoking and resources for quitting. At similar meetings, “often people ask [whether e-cigarettes] are safe and are they good tools for quitting smoking,” she said.

“We share our understanding based on current research,” she said. “They are not currently regulated. They have nicotine and the vapor. Nobody knows what the ingredients are. There is no evidence whether they’re safe or not. No research indicates they have more effect than other tools” such as medication and quit-smoking programs, many of which are covered by MassHealth and other insurance. (The majority of smokers who try to quit fail no matter what method they use).

In Cambridge, as elsewhere, electronic cigarettes are sold in convenience stores, pharmacies and online. In the Central Square Walgreen’s, e-cigarettes sit next to the nicotine gum and patches. They remain unregulated by the federal government and the state, although the U.S. Food and Drug Administration is about to issue rules and a Massachusetts bill under consideration would treat them like cigarettes. Meanwhile, 44 Massachusetts cities and towns – not including Cambridge – have adopted rules barring e-cigarettes in any place where the state workplace smoking ban prohibits cigarettes.

In Cambridge, the city manager’s Tobacco Advisory Committee will hold its first meeting on e-cigarettes Nov. 20 in response to a City Council policy order in July seeking recommendations for regulation, said Sam Lipson, director of environmental health for the city’s public health department. The advisory committee’s meetings are not open to the public.

The public health department worked with the housing authority to develop the smoking ban. “They are in a tough position,” Lipson said of the agency. “They are trying to be reasonable.” Allowing e-cigarettes, despite questions about their health impact,“seems like a reasonable compromise,” especially since the devices don’t produce secondhand smoke, he said.

Similarly, D.J. Wilson, director of tobacco control for the Massachusetts Municipal Association, said the smoking ban “is a huge step forward for the housing authority.”

“I would prefer if they didn’t allow [e-cigarettes], but I appreciate that this is a huge step,” Wilson said. Prohibiting e-cigarettes would make enforcement of a ban much tougher, he said. “Even though we don’t know what is being exhaled, they’re still better than cigarettes.”

He added, though: “We don’t want to see e-cigarettes becoming the norm.”