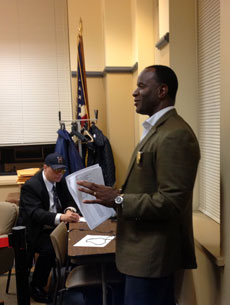 The counting of four provisional and three overseas ballots widened the vote gap between Minka vanBeuzekom and Nadeem Mazen, the challenger likely to be taking her City Council seat in January. Who is expected to serve in the next term didn’t change, either for the council or School Committee.

When the unofficial results from the Nov. 5 election became known after a count of auxiliary ballots Nov. 6, there were six transfer votes between vanBeuzekom and Mazen for the council, but Friday’s hour-a-half Election Commission meeting and vote count ended with a difference of 14 transfer votes. Now challenger Dennis Carlone is closer, with an unchanged difference of 13.

As a result, vanBeuzekom said Friday that she didn’t know if she would call for a recount.

“I don’t know. I’ll take it under advisement,” she said. “I have until Wednesday at 5.”

At the 5 p.m. Wednesday deadline, she will have to present 50 signatures from people supporting a call for a recount. She’ll have to consider how a reshuffle of votes would wind up and consider the accuracy of the machines used in the count, she said.

In a Saturday e-mail to supporters, she called a petition for a manual recount something “we are likely to do” and asked for their participation if it happened – offering training to observers and taking donations for continued campaign expenses.

“Votes are still close enough to justify a recount … I owe it to my supporters and the good people of Cambridge to make sure every ballot is accurately read and every vote is counted. Together we worked hard on the campaign and together we can make sure voter intent is accurate. A manual recount will give us all faith in the process and the form of proportional representation we have in Cambridge,” she said.

Election commissioners said in the previous recount in 2001, a two-week examination of 15,517 ballots – with the ballots counted Friday, that’s 1,227 fewer than were cast in this election – resulted in only a single ballot’s results being corrected.

A candidate getting a recount can ask either for the ballots to be run through the machines again or to be counted by hand as they were in 2001, election commissioner Peter Sheinfeld said.

After the count, Carlone and staffers went back to his election headquarters for a meeting. He has been most worried about being caught up in a recount that looked at the time like it would result from the handful of transfer votes between vanBeuzekom and Mazen. Reelected incumbent Craig Kelley, who could also be caught up in reshuffled votes, rose to 30 from 20.

Money spent on a recount can come out of a candidate’s existing campaign funds, vanBeuzekom said, but candidates who create a separate recount fund have the advantage of raising and spending unlimited amount of money, so long as contributions are declared publicly. Legal advisers are a key expense as the intent of voters with unclear ballot choices is debated and decided by election commissioners.

A Carlone fundraiser with food and a cash bar was to go from 3 to 4:30 p.m. Sunday at ZuZu, 474 Massachusetts Ave., Central Square. As of Friday, an online fundraising page for Carlone’s possible recount expenses had raised $2,291 from 20 contributors out of a hoped-for $13,200.

The Saturday e-mail from the vanBeuzekom campaign directed fundraising to her own online page or for checks to be sent directly to her home. Both candidates have fundraising pages on a site called ActBlue.

Friday’s count of provisional ballots (those of people whose name didn’t appear on lists of registered Cambridge voters in the ward and precinct where they tried to vote) and overseas ballots made election results official but not final, election commissioner Ethridge King said. They would become final only after the deadline for a recount passed without a call for one. 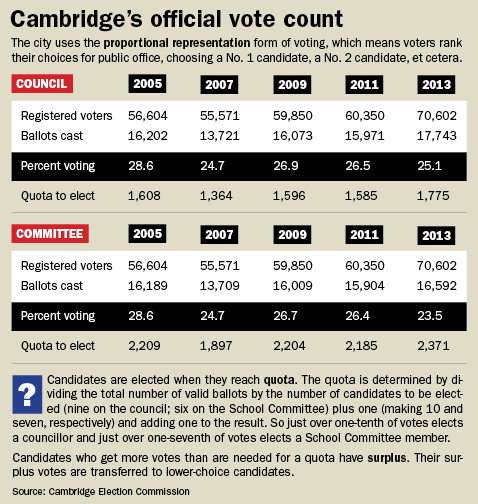 The count began with nine provisional ballots and six overseas ballots. Commissioners found only  four valid provisional ballots, though, resulting from people registered to vote Nov. 5 but trying to do so the wrong polling place. The candidates getting additional No. 1 votes from the ballots were incumbent Leland Cheung and challengers Dennis Benzan, Ron Peden and Luis Vasquez.

In turning to the overseas ballots, the commissioners spent six minutes deciding whether the first they came across had been postmarked in time to be counted. Finally, finding it had been sent Nov. 2 and well in time to be counted, they tore it open to find it was actually for the Dec. 10 special election to fill Ed Markey’s seat in the 5th Congressional District.

“I guess it’s on time,” resident Charles Teague quipped from the crowd watching the count.

Two other ballots were also found to be for the Dec. 10 special election, and the remaining three overseas ballots gave two top votes to Cheung and one to Marc McGovern.

In the School Committee race, the provisional and overseas ballots added two top votes to Patty Nolan and one to Mervan Osborne, leaving the makeup unchanged from Nov. 6 results for the next term.

This post was updated Nov. 16, 2013, with the contents of vanBeuzekom’s Saturday e-mail.