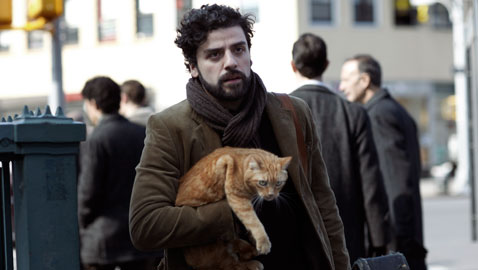 If there’s one thing about a Coen brothers movie, it’s never boring and usually a fresh spin on something that’s been dogeared and begging for a makeover. Sure, they’ve had some arguable miscues (”The Ladykillers” and “The Hudsucker Proxy”), but you have to admire the brothers for their panache, appetite and diversity. Their southwest thriller, “No Country for Old Men,” exceeded the vision of Cormack McCarthy’s laconic prose, “The Big Lebowski” become an instant cult staple and “Blood Simple” was a perfect Hitchcock homage without egregiously lifting. And of course there’s “Fargo,” perhaps the crowning jewel of the duo’s quirky repertoire. If the brothers Coen decided to step in and helm the next chapter of “The Expendables” franchise, even if addled by a script by series star Sylvester Stallone, I’d be the first in line to buy a ticket. You can’t go wrong. Whatever they do, it might not be your cup of tea, but it will stir your gray matter. 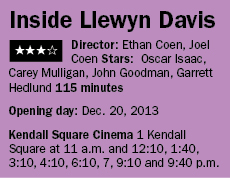 For their latest, “Inside Llewyn Davis,” Joel and Ethan have wound back the clock to bohemian New York circa 1960, as doo-wop fades, mixes with the passion of the beats and folds in with the rising folk rock movement. It’s a time of discovery preceding Vietnam, counterculture rebellion and free love, yet still rooted loosely in post-World War II morality. The film’s titular hero, Llewyn Davis (Oscar Isaac), is an idealist and a self-absorbed asshole who’s intermittently sympathetic. By trade he’s a merchant marine shipping out with a gunny sack for long hauls, but he’s also an impassioned troubadour, plucking gentle, heartfelt ballads about daily misery and eternal yearning.  Llewyn takes himself quite seriously, and he’s also quick to take a handout and has no qualms about bitting the hand that feeds.

The span of the film takes place over a short few cold winter days with Llewyn resolved to staying shoreside and making a mounted push to kick up his music career. One of the obstacles that confronts him is that his usual collaborator and performing partner has recently died. So much happens over the scant few days that it feels like months. The one thing that’s readily clear is that Llewyn is more of a professional couch jumper than he is a musician, especially if you count the number of times he succeeds at the former versus the latter.

Besides landing gigs in a dive bar, Llewyn has to contend with the fact he’s the likely father of child growing inside Jean (Carey Mulligan), a fellow performer who has shared more than just her couch with Llewyn. Fortunately he picks up some work as a session musician, playing alongside Jim (Justin Timberlake, who’s wide-eyed and quite good) – Jean’s performing partner and the other possibility in the impregnation equation. The song they strike up, which Llewyn clearly believes is beneath him, is a raucous ode to the era and burgeoning pop movement called “Please Mr. Kennedy.” Not only is it the best scene in the film, it’s also the perfect B-side to Bowie’s glam hit, “Space Oddity.”

In there too, Llewyn gets a vague but golden opportunity with a record producer in Chicago. It’s also the most surreal part of the movie as Llewyn shares a car with a taciturn James Dean lookalike and an infirm and portly jazzman by the name of Roland Turner (John Goodman, who’s had many a rememberable turn in Coen films) who shows more talent at shooting up and dishing out barbs than he does at charming an audience. Llewyn gets his shot with Bud Grossman (a fabulously understated F. Murray Abraham), who listens to Llewyn play but, while touched by Llewyn’s smoky rawness, can’t see anyway to commercialize it. He tells Llewyn that the only thing he could do is to be part of a packaged band, and to do so he would need to clean up and could never be the frontman.

One of the most telling things about Llewyn are his couch crashing arrangements. He’s apprehensive about staying at his sister’s house in Queens because he disdains her middle American values. But then there’s the Gorfeins (Ethan Phillips and Robin Bartlett), well-to-do Upper West Siders who frequently let Llewyn into their home. At a dinner party there, Llewyn is asked to play something. His response is an angry snarl, as if he were the one being put out. His reaction to Bud’s passive offer is much the same.

By the end of the film Llewyn is a full-blown angry young man, having lived through the odyssey to Chicago (the bloated Goodman passing out in a restroom is a heart stopper), chased the Gorfeins’ wayward cat through the streets of New York and navigated the Kafaka-eqsue bureaucracy of the Merchant Marines.

The sweet poetic touch toward the end is a very young Bob Dylan in silhouette playing the same dive bar Llewyn does. We know how history has it. Both musicians (Llewyn is fictional, in case you were wondering, though he’s purportedly based on the folk singer Dave Van Ronk) have passion and talent. That’s the point of the film, that the edge of fame and fortune and making it is razor thin. Also, the young Dylan might have just been a better couch hopper.