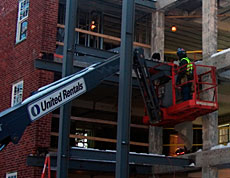 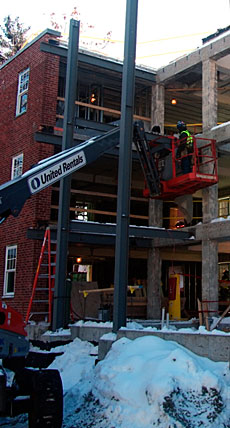 The rehabilitation of public housing, such as has been done recently at the Jackson Gardens project, has hit a stumbling block in the form of a federal program funding cap. (Photo: CHA)

The Cambridge Housing Authority’s latest effort to get federal funding to rehabilitate its aging housing developments ran into a problem in Washington: unlucky timing.

The authority filed applications Oct. 11 to raise $170 million for extensive renovations to its most deteriorated developments. But on that date – when the federal government was shut down in a budget dispute – the total number of applications nationwide passed a 60,000-unit funding cap set by Congress.

That leaves the agency’s plan in limbo, but not dead by any means, Executive Director Gregory Russ told authority commissioners this past Wednesday. The U.S. Department of Housing and Urban Development is encouraging local housing officials to keep applying for its Rental Assistance Demonstration program because not all agencies that got in under the cap will be able to carry out their plans, Russ said.

Authority planning and development director Terry Dumas said that before the authority filed its applications, the total number of units sought stood at 58,875. That left 1,125 units under the cap – but the authority applied for 2,130.

Does that mean Cambridge will be allowed to finance 1,125 units but not the remaining 1,005? No one knows. “We will have to see how all this plays out,” Dumas said in an e-mail. Authority officials hope that other applicants will drop out, freeing up space for Cambridge. Or maybe HUD will succeed in convincing Congress to raise the limit to 150,000 units, something the federal agency is pushing for.

The authority has been trying to finance large-scale repairs to its developments as conventional federal funding dries up. Some buildings haven’t been renovated for decades and suffer from leaks, outdated plumbing and electrical systems and other problems. Without extensive work, the housing could deteriorate to the point where it’s not livable, officials say.

The authority financed several projects with stimulus funds. When that money ran out, it tried to use a federal loophole that would have doubled federal support in return for transferring developments to private ownership on paper, turning over the buildings to nonprofit corporations controlled by the authority.

Bad timing killed that attempt when HUD closed off the loophole shortly before the authority applied last year to use it. With many local agencies trying to exploit the strategy, HUD officials feared costs to the federal government would skyrocket.

The new plan also calls for moving authority property to private nonprofits controlled by it and raising much of the funding for repairs from banks and private investors, retaining tenant protections and assurances the housing will remain low-income. The difference is that HUD would not increase its support, forcing the authority to use some of its own resources, such as surpluses, savings in other programs and eventually possibly the funding stream from some of its Section 8 rent vouchers, which help poor families and individuals pay rent.

Authority officials have said HUD encouraged them to apply for the program, which makes them optimistic the federal agency will help them get approval despite the 60,000-unit cap.