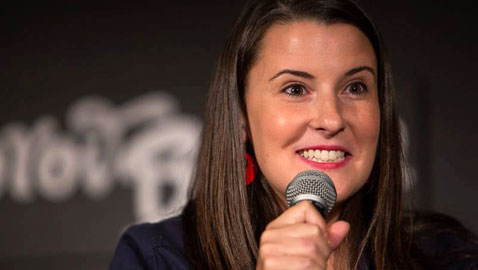 What have local comedians been up to this week? We should start with Cambridge’s Niraj Shah, who, in the spirit of the season, has made a resolution:

My goodyear resolution is to fill my tires.

Shah is a regular at clubs in Boston such as The Comedy Studio in Harvard Square, ImprovBoston in Central Square, Dick’s Beantown Comedy Vault, Nick’s Comedy Stop and other rooms across New England. His website and calendar are here.

Don't judge a book by its cover. Unless that cover is white and has dreadlocks.

Matt D. was named a “Comic to Watch” by Comedy Central, won the 2012 U.S. Magner’s Comedy Festival and is a character on the Jonathan Katz series “Explosion Bus.” He performs at 8 p.m. Jan. 15 at ImprovBoston, 40 Prospect St., Central Square.

Cheese, army knives, bank accounts…is there anything that the Swiss don't have?

Cambridge writer and comedian Caitlin Durante has participated in the Women in Comedy Festival, Out of Bounds and the Boston Comedy Arts Festival and does standup regularly in the Boston area. She’s onstage at 9 p.m. Thursday with the Baby Giraffes at ImprovBoston’s Sketchhaus.

That's so awful how SeaWorld separated the baby whale from it's mother. [pets dog on lap].

Jono Zalay lives in New York City, where his comedy will benefit most from the doctorate in neuroscience he earned studying in Boston. He has no upcoming shows here, though, so this may be the last time you see a tweet from him.

In case you've been wondering, National Geographic Channel is not classier than TLC.

And just to wrap up roughly where we started:

James Creelman has a neglected website that posts no upcoming shows. But he’s onstage at The Comedy Studio, 1238 Massachusetts Ave., Harvard Square, in 8 p.m. shows Sunday and Jan. 19.