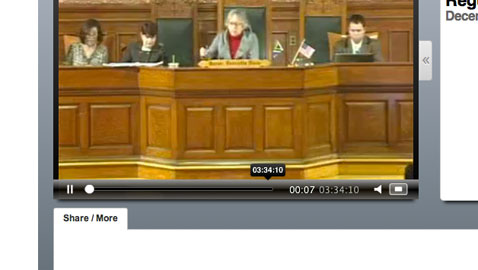 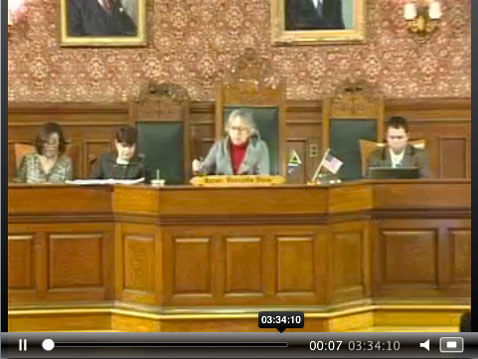 That’s right — the Dec. 16 meeting of the City Council lasted three hours and 34 minutes. Now, uh, where was that five-minute talk about meeting transcripts?

In its final meeting, the previous City Council showed it didn’t really understand public access and government transparency. Maybe the council holding its first meeting Monday will be better, although only four members of its nine turned over in the November election.

Some of the two-year term starting Monday will be spent looking at how the council runs its meetings, and there’s plenty to look at: the dumb, nearly superstitious rule against televising “roundtables”; the three-minute limit set on public comment at hearings when the rules say five; the way councillors reverse their votes, which brought on questions a few times in the past term; and of course the matter of co-sponsoring policy orders and resolutions.

(Maybe it will save the council time if it’s just said very simply here: No one in the public gives a damn whether you co-sponsored a policy order. Give us better reasons to vote for you.)

But after the accusations filed with the state on open-meeting law violations – one bringing a bit of council confusion when the attorney general agreed with a filing by resident Tom Stohlman – the council has already taken a step in the wrong direction.

Five members voted no or abstained from voting at the Dec. 16 meeting on even considering spending $30,00 on a year of transcripts of council meetings.

Two extremely disappointing “no” votes: Minka vanBeuzekom (no longer a councillor as of Dec. 31) and Leland Cheung.

Three councillors explained their votes and objections, including Tim Toomey – who has a delusional view of Cambridge city government as being perfectly transparent that he has expressed roughly in tandem with votes for nonpublic sessions to talk about discrimination lawsuits costing the city millions of dollars. He didn’t like the idea “we seem to be the only ones required” to have transcripts, and former councillor Marjorie Decker (now a state representative) called them “an unfunded mandate” from the attorney general. David Maher, although he voted in favor of consideration, said he agreed with Toomey.

This made the councillors sound like sulky children. “Why are we the only ones” is a pretty common whine of the young, especially when kids have to do something as a corrective for misbehavior.

But the real mistake was in looking at a stenographic record – meaning, a word-by-word transcribing of the action during council meetings – as a punishment at all, when really it was a great chance to let the public into what city government does and to have some consistency among city boards. It was unclear from the council’s discussion, for instance, whether they even knew that the Planning Board and License Commission post transcripts of each of their meetings.

Even the few weeks of testing that transcripts got at the council level weren’t done quite right: Planning Board and License Commission transcripts are online and searchable, while the council’s are not searchable and available online only because independent journalist John Hawkinson scanned and posted them for Nov. 4, Nov. 18 and Nov. 25.

Sure, neither of those boards’ meetings are televised and available online for streaming or download, which the council’s are. School Committee meetings are online and can be streamed – but not downloaded.

But the council and committee can meet for four or five hours at a stretch. If a member of the public (and, for a little personal transparency, member of the press) wants to find discussion of a specific topic, they could wind up being forced to watch four or five hours’ worth of video – and then likely have to transcribe what they hear there. If people aren’t sure what they’re looking for among city archives, they’ll have to watch video after video after video to find it, and neither the council nor committee videos are particularly friendly to pausing, rewinding and replay.

If the city is going to stick with video-only for the council and committee, it should look to Somerville for a better way to do it. The Board of Aldermen there doesn’t just post a single streaming video file covering the length of a meeting; it has a system that links to snippets of video for each item on the agenda, so you can go straight to debate on a specific topic. It lets you watch, say, five minutes of video you need rather than five hours hoping you’re in the right place.

City officials should also decide whether they’re comfortable with the inconsistency in archives and say why: Why the Planning Board and License Commission need searchable, online transcripts but committee meetings need full narratives of what transpires but the School Committee needs video and the council needs downloadable video.

And it has nothing to do existing rules (already getting that fresh look in the council this term) or budget (of which the council saved $30,000 for the coming year with its vote, or 0.01 percent of the current budget). It has to do with how it wants to grant the public access to its doings for the foreseeable future. Is this a truly transparent government? Or one that resists transparency because it’s sulking over the fact the attorney general already called it once on its bad behavior?