Plans for courthouse, with grocer attached, draw concerns for light, wind and falcons 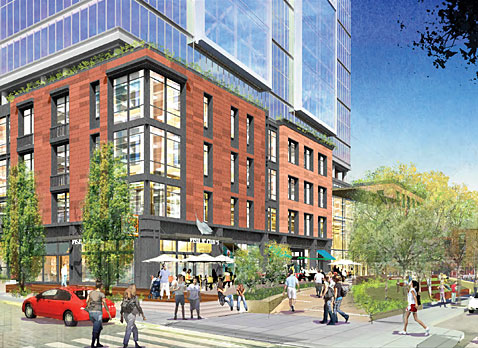 Plans for courthouse, with grocer attached, draw concerns for light, wind and falcons

A rendering shows plans for the makeover of an East Cambridge courthouse by developer Leggat McCall.

Developer Leggat McCall presented a bit more detail on a neighborhood grocery store Tuesday, part of its request for special permits from the Planning Board for redevelopment of the former Edward J. Sullivan Courthouse. The board deferred action on the proposal until its Feb. 18 meeting, but offered generally positive comments on the proposal interspersed with specific recommendations.

The proposal is to repurpose the 40 Thorndike St. courthouse primarily as an office building, but it will be mixed use with ground-floor retail and 24 residential units, along with a green courtyard between the building and Spring Street. The lower retail and residential stories will feature masonry or terra cotta, but 18 stories of reflective glass tower will rise up out of it.

As is generally the case, the Article 19 special project review process is a way for the board to attach conditions to a project to help keep it consistent with Cambridge’s development and growth philosophies, while mitigating negative impacts such as traffic. It is rare for the board to reject a proposal outright, and it remains to be seen how Leggat McCall will incorporate feedback from the board and public when it presents again at the Feb. 18 meeting.

Additionally, Leggat McCall will present the current version of its plan to the East Cambridge Planning Team at its meeting tonight. The neighborhood group has not yet voted on the proposal and has no formal position, though several members expressed concerns about the project at the Planning Board meeting Tuesday.

Leggat McCall was one of three bidders seeking to redevelop the courthouse, and they were selected by the state’s Division of Capital Asset Management and Maintenance in December 2012. The existing courthouse rises 22 stories up in East Cambridge between Second and Third streets, and is widely acknowledged to be grossly out of scale with the rest of the neighborhood – a relic of the state not being required to follow local zoning rules on its own construction.

In addition to presenting its design for the courthouse building and showing a model of it, the developer discussed a proposal to create a neighborhood grocery store in the city’s First Street garage. David Chilinski, an architect and urban designer, presented what he stressed was a preliminary idea: a floor plan with 12,600 square feet along First Street devoted to a grocery he suggested was inspired by Mid-Cambridge’s upscale Broadway Marketplace, at 466 Broadway. 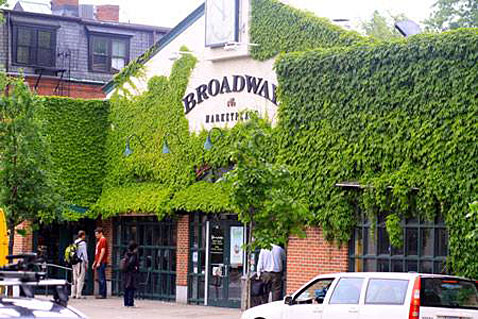 When pitched to the City Council in October, the store was described as being 12,000 square feet at the largest, and a Leggat McCall executive said “early outreach” suggested the site “would be attractive to a number of grocery store operators.”

Councillors liked the idea, but weren’t sure why Leggat McCall should be automatically awarded the rights for a store in the garage.

Members of the board expressed concerns about the lighting of the glass tower, especially as late as midnight. H. Theodore Cohen noted the lack of renderings that show the entire building in context. Tom Sieniewicz said that the building’s current orange stripe is iconic, and wondered if there should be a nod to it in the new design; many in the audience did not support this idea.

Typically staff from the Community Development Department continue to consult with developers throughout the project, but the members of the board are not directly involved. Steve Cohen suggested that the importance of this project might merit their continuing direct involvement, even while praising the developer for doing a “phenomenal job with a tough task.”

After presentations from the developer, the board took public comment for a half-hour from about eight members of the public. Barbara Broussard, president of the ECPT, led off: “We have seen similar iterations over time. This was not the very first, or the one the community would have selected,” she said.

Broussard expressed concern about the traffic impacts of the project on the neighborhood’s parking, and said the neighborhood group would need to look more closely at the latest version of the plan before rendering its opinion.

Fellow group members Jay Wasserman and Carole Bellew expressed concerns. Wasserman worried about the city leasing 400 parking spaces to Leggat McCall in the First Street Garage, and suggested that arrangement should be reviewed after two years or when the building reached 70 percent occupancy. He also expressed hope that the public open space would be as inviting as pictured, noting that that is not always the case. Bellew called the group’s experience with Leggat McCall “our worst negotiation with any developer,” and also asked the developers to look at space for startup businesses in the building.

Resident Roberta Goto, who lives across from the courthouse, presented a list of what she termed “practical considerations,” such as restricting construction times to 7 a.m. to 6 p.m. on weekdays so residents and children could sleep, restricting deliveries to construction hours, ensuring construction workers would not park on streets limiting street closures and similar issues, many informed by her experience with other nearby construction. Members of the board later echoed Goto’s concerns, saying they thought construction mitigation was important when a commercial development takes place in the middle of so much residential property.

Others in the public expressed concern over the light from the glass windows of the building at night; the strong winds the building captures with its height, producing downdrafts; and the opportunity for the lower floors of the building to match the nearby historic buildings.

Members of the public and the board all said the building was too tall – many had hoped that a few floors could have been removed – but seemed to accept there was little to be done about it.

At the end of the board meeting, Cambridge Community Development’s Roger Boothe announced he would be retiring at the end of February after 35 years with the city. Boothe serves as director of urban design; he and his staff supervise the review of special permits under the city’s Article 19 ordinance, affecting projects larger then 50,000 square feet, among other conditions. Boothe indicated he would be preparing a “little retrospective talk” for the board before his departure.

This story was updated Jan. 9, 2014, with the correct location of the courthouse building.