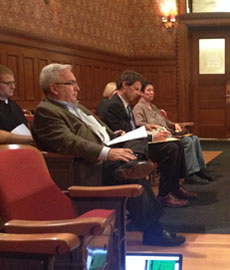 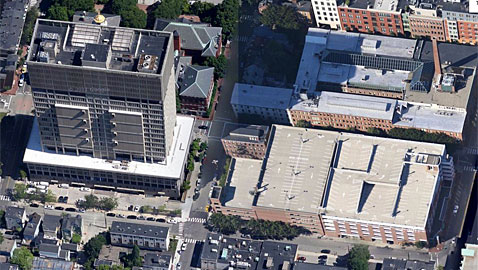 The former Edward J. Sullivan Courthouse in East Cambridge could have a new grocery store as a neighbor, using ground-floor parking garage space across the street. (Image: Google)

The developers of the city’s jail and former courthouse tower offered East Cambridge a new grocery store Monday, and city councillors accepted the idea – or, rather, took it away.

In refining its plans for a $200 million-plus remake of the former Edward J. Sullivan Courthouse with, mainly office space with 24 to 48 units of housing, Boston developer Leggat McCall looked across the street and found “opportunities for the courthouse project to meet project needs while simultaneously advancing both the interests of the neighborhood and the city,” said Robert Dickey, an executive vice president and partner at the firm, in a letter presented Monday at a City Council meeting.

The company offered to lease 420 of the 1,100 parking spaces in the city-owned garage across the street, as well as some of its long-shuttered retail space, combine the space and sublease it to a grocery store – becoming the only such business in the area. Aside from a handful of mini-marts and bodegas, the nearest grocers are a Shaw’s on McGrath Highway in Somerville and a Whole Foods Market across the river on Cambridge Street in Boston.

The proposed grocery store would be from 10,000 to 12,000 square feet, roughly the size of the Whole Foods Market on Prospect Street near Central Square, according to Dickey and attorney James Rafferty. 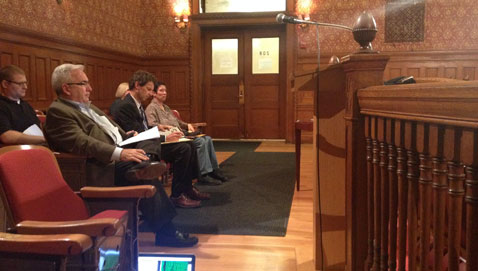 The developer has done “some early outreach,” Dickey said. “We believe the location would be attractive to a number of grocery store operators.”

An accompanying letter from City Manager Richard C. Rossi said the developer’s suggestion, if interesting to the council, was just the start of a six- to eight-month process.

“I wish it were shorter, because I think I’d love to see a grocery store in that location … this is something I’ve long talked about,” councillor Tim Toomey said. “The idea of a grocery store could be very beneficial to a lot of the residents.”

Especially with Leggat McCall committing to 90 parking spaces within the redeveloped courthouse complex – down from 120 when the plan was first presented in April – the parking garage can stand to lose the first floor to retail, according to the testimony of Rossi, Deputy City Manager Lisa C. Peterson and Susan Clippinger, director of the city’s Traffic, Parking and Transportation Department. Even subtracting about 200 leases for nearby businesses, the 500 parking spaces that remained would be enough for daily parkers, as well as the heaviest use: emergency parking for neighbors who need to get their cars off the streets during bad weather.

The structure – which stretches the length of a city block and is called the First Street Garage – “has been underutilized since the courthouse closed in the 2007-08 timeframe,” Dickey said.

Referring to the workers who would fill some 460,000 square feet of office space in the redeveloped building, he called the First Street Garage “the logical source for our parking. Just as important to us, however, is how the garage might become more than just a place to park motor vehicles … we’ve been hearing from residents for some time that a retail grocery store would be a desirable amenity for that neighborhood.”

Councillors agreed – but seemed wary of moving too fast, given the potential rising value of the property as development at the courthouse and in nearby NorthPoint made the area more vibrant.

Ken Reeves, in particular, wondered how it was that Leggat McCall was attached to the idea simply because they were the winning bidder to remake the courthouse complex.

“I would have thought that the state process would require us to go out to bid and any number of others might apply too,” Reeves asked the city managers. “Could you explain that?”

Peterson confirmed city officials would be following a formal request for proposal process that they could write “in a way that best benefits the city,” and Rossi said the RFP could even be flexible enough to split the parking space from the existing retail space.

The nine councillors agreed unanimously to let the officials start exploring the reuse of the garage. The process includes plenty of chances for the public to weigh in, officials said.

“This is an exciting step forward,” David Maher said. “Hopefully this is the beginning of the end of the blight that is along First Street. The neighborhood has longed to see these buildings better used – our building and the courthouse itself.”