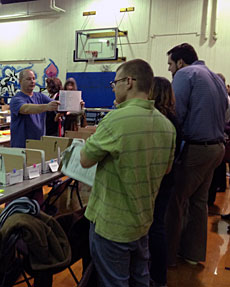 Expenses included not just recount-worker wages of $74,000, but the cost of police details and such things as rental costs on tables and other incidentals. There was no rent charged for the site used by the commission for the work, the Willis Moore Youth Center in the Riverside neighborhood. (Of that amount, $1,200 was to pay for outside storage costs for the rest of the fiscal year, Rossi said.)

The size of the work – there were 25 candidates in the Nov. 5 election and 17,745 valid council ballots out of 17,851 cast – was tempered only by the fact the Election Commission had improved its practices over the years and wrapped up sooner than some expected. “This might be two weeks,” said the commission’s executive director, Tanya Ford, as she looked toward the recount from Nov. 20. That was the day the commission accepted a recount petition from Minka vanBeuzekom, a first-term councillor who ended Election Day six transfer votes short of reelection.

Ford’s back-of-the-envelope calculations included more than just ensuring vanBeuzekom’s loss was legitimate. “In addition, we have to stop, do an election, finish up results the next day and then reconvene,” Ford said, referring to the commission’s need to set up voting machines and count local results in a Dec. 10 special election to fill U.S. Sen. Ed Markey’s former 5th Congressional District seat.

Despite the interruption, the commission and its roughly 70 election workers beat expectations.

VanBeuzekom said before the recount that she was confident the work would go faster than in past years, citing the commission’s new method for matching ballots, and said the recount could be “beneficial” in, at the least, providing another chance to see how the process can be improved.

In each case there has been no change in results, despite the difference between a win and loss coming down to a handful of votes.

VanBeuzekom brought in 150 signatures for her recount petition when the commission needed only 50, but many in the community were unenthusiastic if not outright resentful that she insisted a recount take place.

“In any other city in this country, an automatic recount procedure would be in place for an election so close,” said Joseph Aiello, a member of the Cambridge Democratic City Committee who supported vanBeuzekom’s call for a recount.  “We are talking about less than 1 percent in this case.”