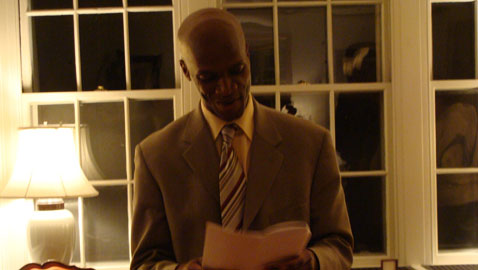 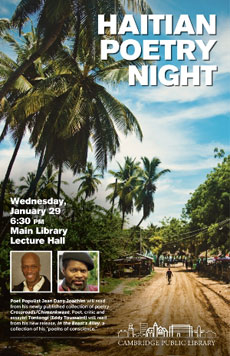 Two recent collections, one a celebration of the merging of languages and the other a political proclamation, get a reading Wednesday at a Haitian Poetry Night in Cambridge’s Main Library.

Jean Dany Joachim, a former city poet populist, will read from his “Crossroads/Chimenkwaze,” and poet, critic and essayist Eddy Toussaint, known as Tontongi, will read from his release, “In the Beast’s Alley,” a collection of his “poems of conscience.”

Joachim called his collection, released last summer, “the meeting point of my writing in my native Haitian Creole and English … Rather than a compilation of translated poetry from one language to the other, this is the crossover of one culture to another with the uniqueness in writing that each one brings to the process. It’s giving birth to writing through writing.”

In addition to his two-year stint as poet populist ending in 2011, Joachim directs the Sunset Poetry Series at Bunker Hill Community College and founded the City Night Readings series in Central Square.

Toussaint released “Beast’s Alley” in October, calling its political nature a “a cry of conscience, an appeal to surpass bad faith, a reach to transcendence.”

“I also identify with the indigenous peoples who, like the anti-colonialists Caonabo and Anacaona in Haiti, resisted the trampling of their rights by the newcomers. They paid the genocidal price as a result,” he said.

Haitian Poetry Night is at 6:30 p.m. Wednesday in the Lecture Hall of Cambridge Main Library, 449 Broadway. The event is sponsored by the library and is free and open to the public.