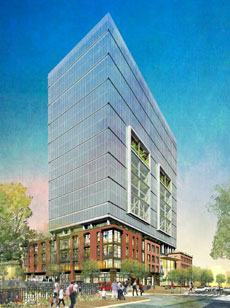 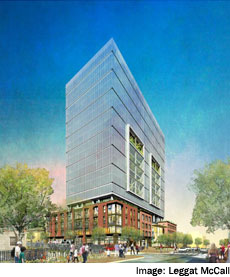 What was already an unpopular plan for East Cambridge’s least favorite building got another hit or two Monday, with four city councillors moving in opposition and reports being heard that the Planning Board had canceled a hearing about it.

Boston developer Leggat McCall has planned since 2012 to “reskin” the 22-story, three-basement former Edward J. Sullivan Courthouse at 40 Thorndike St. into 460,000 square feet of office space, some retail and 24 to 48 units of housing.

The council order, by councillor Dennis Carlone and co-sponsors Nadeem Mazen, Marc McGovern and Tim Toomey, is to be heard March 17 asking that the council go on record to show it “will listen closely to the concerns of East Cambridge residents and consider the overall impact of the Sullivan Courthouse redevelopment project” and strongly encourage the state and developer to rework its proposal “in an expeditious and creative fashion to substantially reduce the height, traffic and environmental impacts.”

Parking for the project relies on a council vote, and the order hints that it will be hard for developer Leggat McCall to get the needed two-thirds majority vote without changes for “the greatest public benefit.”

Calls about the Planning Board agenda to city officials were not answered before this story was posted, but publicist Dan Riviello – formerly a spokesman for the Cambridge Police Department – said he believed the meeting had been postponed. In a 4 p.m. press release, Carlone said “It has been reported that tomorrow’s hearing is now postponed,” and there’s this statement on the Facebook page of the East Cambridge Planning Team:

We have been informed by Legatt McCall’s representatives that the Planning Board meeting hearing for the courthouse has been removed from the agenda and is being rescheduled in response to requests made at the last ECPT meeting and to allow them time to respond to feedback received thus far in the process.

Team president Barbara Broussard said Monday afternoon in a mass email that she asked for the delay from the developer’s attorney, James Rafferty, and would let people know of the new date and time.

Leggat McCall was awarded courthouse development rights by the state’s Division of Capital Asset Management and Maintenance in December 2012. Construction was expected to start this summer.

But a Feb. 23 meeting of a new group called the Neighborhood Association of East Cambridge began a new charge against the project, and that was followed by a courthouse meeting run by Carlone the next day, then a meeting of the East Cambridge Planning Team on Wednesday that saw the group voting unanimously against the development. The group said the proposed development would be “substantially more detrimental to the neighborhood” than the current use – a largely empty, asbestos-ridden tower with hooting prisoners in the Middlesex Jail facility on the top four floors.

Although it has discussed the tower many times before, it was a three-hour meeting, ending with a wish for the Planning Board to reject the special permits Leggat McCall would need to get started on demolition and construction.

The council order wants the developer and state to “work together in an expeditious and creative fashion to substantially reduce the height, traffic and environmental impacts” of the proposal.