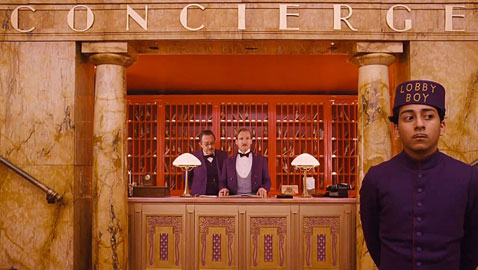 Wes Anderson’s latest is a series of stories within stories. It begins in 1985 with a middle-aged writer (Tom Wilkinson) taping a testimonial about the inspiration for his cherished book, “The Grand Budapest Hotel” (the script is based on the writings and life of Stefan Zweig, who did write such a titled book) and jumps back to 1968, with the writer now played by Jude Law cooling his heels in the hotel on the Austrian border in a fictional country. It is there that he meets the hotel’s reclusive owner, a Mr. Moustafa (F. Murray Abraham), and is invited to dinner in the grand ballroom – which isn’t so grand anymore, but a tired reminder of more resplendent times. The rest of the hotel is similarly worn, and there are few guests. The author and the owner happen to be the only two eating in the vast hall. 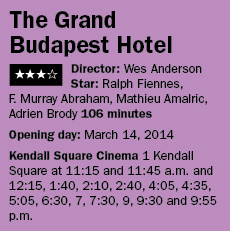 From there Moustafa tells how he became the owner, as there lingers some mystery and controversy how he took ownership and who the owner was before him, and so we zip back to a prosperous time between the two Great Wars when the mountain-perched hotel was a destination for Europe’s rich and famous. Moustafa is then just a bellhop named Zero (Tony Revolori) and the hotel is ornate and thriving under the management of a very fastidious and fickle concierge named H. Gustave M. (Ralph Fiennes), who goes to no end to please his guests, which includes sleeping with and carrying on with many elderly women – even though his predilection is more for those of his own sex. One such pampered guest (Tilda Swinton) dies and in her will bequeaths Gustave a priceless painting (“Boy with Apple”), which doesn’t sit well with her avaricious progeny (Adrien Brody) who accuses Gustave of murder to get what he feels is rightfully his. This serves as Anderson’s jumping-off point, as Gustave gets relegated to an impregnable prison and the Second World War begins to break, sending ripples of chaos throughout the small, in-the-way country. Through it all, the patient, resourceful Zero continues to serve his master.

With so much activity, obligation to globe-shaping history and grand gusto, Anderson’s twee quirkiness strains some to find its cadence. The great European conflict is not so easy to sweep in a wicker basket with a tidy irreverent brushstroke as, say, Salinger’s Glass family was in “The Royal Tenenbaums” or island vacations and scout camping were in “Moonlight Kingdom” – which might just be Anderson’s most complete and thorough work to date.

The intrinsic charm of “Hotel Budapest,” however, lies within its fringe, be it Willem Dafoe as Brody’s lethal right-hand man (who can ride a motorcycle, guns blazing, through a snowstorm) or Harvey Keitel as the skin-headed jailbreak master. Even Edward Norton pops up as an SS-styled officer who has great deference to Gustave. But the film’s secret ingredient – besides Fiennes himself, who goes out on a limb leveraging his inherent suaveness and charm and infusing it with a healthy dose of foppish control freak – is the palpable bond Gustave forms with the vulnerable but capable Zero, a refugee from an exotic, war-torn country and someone the German machine and its long-reaching tentacles takes special notice of. The unlikely pairing becomes the heart of the movie, much as similarly heartfelt heroic oddballs drove “Moonrise Kingdom” and Anderson’s early signature success, “Rushmore.” Even “Tenenbaums.”

The one thing to note about a Wes Anderson film: It requires your attention and some work. They’re not sit-down, let-them-wash-over-you affairs, but for those who are patient and wait for it the effect is potent, visceral and lingering. “Budapest” may be Anderson’s most ambitious endeavor to date and his biggest change-up – even more so than the animated “Fantastic Mr. Fox.” Everything Anderson and his troupe have put on the screen resonates with effort and artistry. It’s so well-crafted and well-staged it’s heartbreaking to see much of its poignancy lost between the tempered layers of a twisting narrative lattice.