Once and for all, Disney’s ‘Pirates’ movies aren’t ‘based on a Disney theme park ride’ 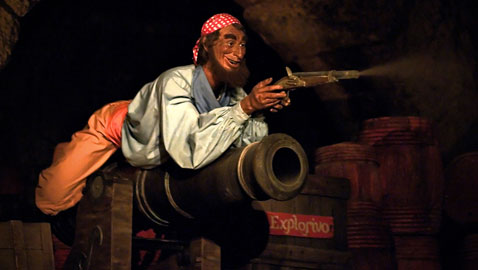 Once and for all, Disney’s ‘Pirates’ movies aren’t ‘based on a Disney theme park ride’

Now that Johnny Depp is compounding fans’ recent cinematic disappointments with news he’s marrying a significantly younger woman (Depp is 50; fiancée Amber Heard is 27) there’s also a recurrence of the maddening critique that the “Pirates of the Caribbean” movies are “based on a theme park ride.”

Look: Disney’s “Pirates of the Caribbean” ride is not the origin of all the pirate-y stuff we saw in the “Pirates of the Caribbean” movies. The ride borrowed from a long and well-worn history of pirate-themed pop culture going back at least to Robert Louis Stevenson, whose adventure novels predate cinema itself. The Disney movies reiterated those trappings with a bit of synergistic branding, but this supposedly smart pose of catching an act of corporate self-love gives the company far too much credit.

(If anything, the Disney movies’ focus on the supernatural and Depp’s comic interpretation of Capt. Jack Sparrow has changed how we think of pirates far more than the ride ever did.)

If you say the Disney movies are “based on a theme park ride,” you may as well say that about every recognizably piratical movie since 1967, when the ride opened at Disneyland. That’s dozens of films from “Los Corsarios” in 1971 to “Pirates: Quest for Snake Island” in 2009 that wouldn’t be just “based on a ride” but “ripping off Disney’s ride” but will never explain why “Long John Silver” from 1954 or “The Black Pirate” from 1926 look and sound so familiar.

Let’s just all agree to either stop saying making this dumb, inadvertent claim that Disney somehow invented everything we think of when we think of pirates – which is demonstrably untrue – or start making similarly pointless complaints about why we keep making Christmas films “based on a Coke can” just because our most common image of Santa Claus comes from Coca-Cola advertising.