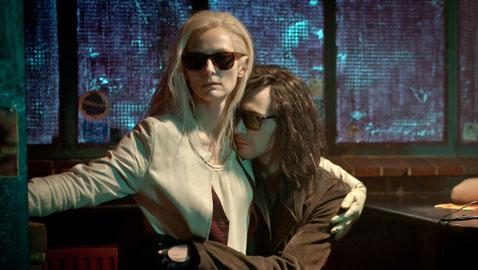 In Jim Jarmusch’s quirky “Only Lovers Left Alive,” vampires Skype, take selfies and book their midnight flights through priceline.com or the like – really getting at the complexities of being a vampire in the 21st century. 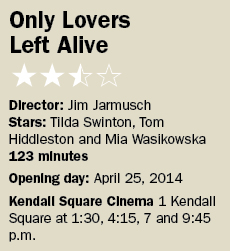 Going back to “Stranger Than Paradise” and “Mystery Train,” Jarmusch characters have always been victims of ennui and complacency. That holds true here as Adam (Tom Hiddleston, Loki in the “Thor” and ”Avengers” movies), is a “suicidal” vampire living on a desolate street on the fringe of Detroit, composing industrial rock operas and nipping at vials of black-market blood he gets from a compliant lab worker (Jeffrey Wright). He also has a loyal gofer in Ian (Anton Yelchin, Chekov in the new “Star Trek” series) and a far-flung wife (Tilda Swinton) biding time in Tunisia.

Adam’s weary and bored. He’s lived hundreds of years, and the implication is that he’s had his hand in most major musical movements going back to Bach and Beethoven. Eve (Swinton) is a much livelier sort, hanging out in hookah bars with Christopher Marlowe (yes, the guy who went toe-to-toe with Shakespeare, played by a gaunt and game John Hurt). Even though it’s clear their love is palpable and eternal, their interests have them in sort of an undead long-distance relationship.

The arc of the story pretty much has one paying the other a visit. Troubles arise when the supply of platelets and plasma runs dry and Ava (Mia Wasikowska), an impish succubus who doesn’t play by the rules, shows up.

Hiddleston and Swinton are sublime, aloof and enigmatic while bearing the experience and knowledge their characters have amassed over the centuries. The pair, as well as Wasikowska, are naturally elven and ethereal in appearance, which goes far to sell Jarmusch’s terse, atmospheric subtleness. The touches of the supernatural are meted out to just the right degree, making the film an intriguing companion to the recently released “Under the Skin” – likewise indie, penetrating and macabre in texture, though it’s more of a psychological horror-thriller, while “Lovers” is an ode to a romance that has stood the test of time; the lovers’ dependence on human blood is merely an inconvenient means of their timelessness, not a gory point of contemplation. Jarmusch has sunk his teeth into a timeless love, and while having fun with history and modern-day travails, gets at the human heart of the matter.