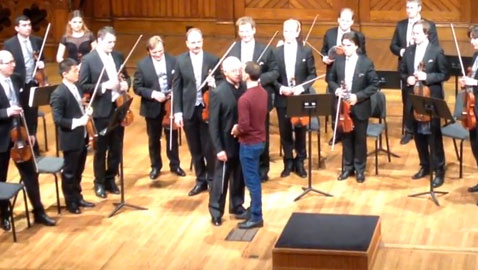 Fifty protesters were outside Sanders Theatre on Sunday to confront Russian violinist and conductor Vladimir Spivakov about his support of Russia’s military actions in Ukraine, but a separate activist got inside and made quite a show of it – getting onstage to give a short speech in front of a tuxedo-clad Moscow Virtuosi Chamber Orchestra and standing eye to eye with Spivakov himself.

Moscow-born Roman Torgovitsky, 38, a Harvard Medical School alumni from Wayland, was arrested then, literally picked up and carried away by a Harvard University police officer to be charged with disorderly conduct, for which his arrest report suggested he’d pay no more than a $150 fine. His case was dismissed Monday.

The arrest report by Officer Josiah Christian, though, is wrong in several ways in describing what happened onstage. While its disagreement with a written account posted online by concertgoer Simona Asinovski could be laid simply differing perceptions, it also bears little resemblance to a YouTube video posted by a concertgoer named Gennadiy Berezutskiy that starts with the incident.

Here is Christian’s description from the arrest report:

At approximately [8:55 p.m.] I observed an individual run up on the stage and stand next to the conductor of the orchestra … I began to make my way down toward the stage when I observed the suspicious individual walk up to a musician in the orchestra and was literally standing inches away from his nose. This suspicious person was beginning to become confrontational with the musician. At that point, the crowd of approximately 500 people began to boo this individual. I got up on stage, placed this individual in a wrist lock behind his back and physically carried him off the stage.

In the video, however, Torgovitsky is standing alone for the first 29 seconds of the video, surrounded by musicians he comes near only when he is speaking through them to the conductor, who is standing toward the rear.

“He was ready to fight. A couple of musicians came up and held his hands back,”  Torgovitsky said in an interview with The Harvard Crimson.

A musician approaches the two, then a second one, and at 45 seconds into the video Christian is seen walking on stage to cart Torgovitsky away.

Here is an excerpt from Berezutskiy’s video showing the protest and arrest. (The complete version on YouTube – including the performance of “The Tango of Love” that followed – is above.)

While Christian wrote that Torgovitsky “was beginning to become confrontational with the musician,” some members of the audience weren’t even clear from his words or the action onstage that he was protesting. According to Asinovski’s account:

Near the end of the performance, a young man in jeans and a Harvard T-shirt walked on stage, holding a baseball cap.

Spivakov had just stepped up the back of the stage, and Harvard shirt motioned for him to come near.

The Harvard shirt handed the baseball cap to Spivakov, and then turned toward the audience: “I want to thank you, for expressing your national position by signing the petition.”

I felt confused. When he first climbed the stage with the hat, I thought it was a symbolic accolade on top of all of Spivakov’s accolades – a gift from Harvard Yard … As soon as he said his congratulatory phrase, the audience erupted. Whistles and yells came from every part.

The Harvard guy tried to shake Spivakov’s hand, I think, and no one in the audience could hear what Spivakov was saying.

Several members of the orchestra came up to them.

Spivakov put his hand, very roughly, on Harvard’s back and tried to shake him.

The security guard mounted the stage, put his arms around the Harvard guy, and lifted him struggling off the stage.

The crowd erupted in cheers. Spivakov opened his arms out wide to the audience, and many people started to rise.

I turned to my aunt and asked “I’m confused, are we applauding that he was thrown offstage? So we are saying we don’t support Putin?”

“I’m not sure,” she replies, “Simona, I think it was a sarcastic protest.”

A message seeking information about the arrest was left shortly after 2 p.m. Tuesday with Steve Catalano, public information officer for the Harvard University Police Department.

This post was updated May 14, 2014, to show Torgovitsky’s actions were unrelated to those of the protesters outside Sanders Theatre.