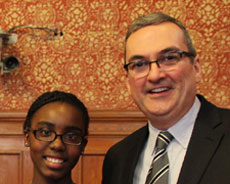 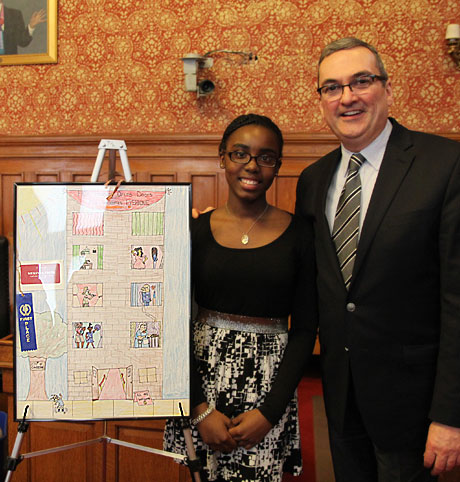 Fifth-grader Mekinsa Frith and Mayor David Maher show off the poster that won her first prize at the Annual Fair Housing Award Ceremony and Reception held April 16 at City Hall.

Students in from the Amigos, Cambridge Street Upper, Graham & Parks, Putnam Upper and Tobin Schools participated in the poster and essay contest. This year’s theme was “Fair Housing Opens Doors and Welcomes Everyone” and the first-prize winner of the poster contest was Mekinsa Frith, an eighth-grader from Cambridge Street Upper School. Anahid Johnson, a fifth-grader from the Amigos School, won second prize.

Recipients of the Innovations in Fair Housing Award were Toni LaRosa and Judy Johnson of Caritas/Central House, in recognition of their many years of commitment to fair housing in Cambridge.