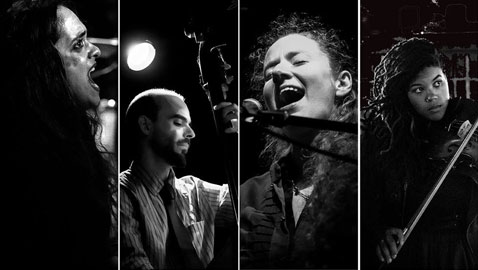 You’re always guaranteed a powerful show with avant-chamber pop band Jaggery, but Thursday is as close as you’ll come to a guaranteed perfect show: That’s when the band records a live album.

“We’ve crafted a set of our favorite old and totally new songs for this sit-down summer evening show. We’re recording it live for a live tour album to bring on the road with us,” said Singer Mali, who leads Jaggery and is known for crafting the Orgs, a kind of dark variety show that take the stage semi-regularly at Oberon or at her South End arts cooperative.

“Your shouts, cheers, jeers, hoots, hollers and heckles may all make it onto the album,” she said of the Thursday “For The Record” show.

Jaggery is a five-member band blending classical, avant-jazz, world, rock and pop music and layering harp, viola, upright bass, piano and drums with an instrument that truly sets the band apart: Mali’s voice, which goes from menacing purr to outright opera with astonishing ease. As part of the local performance art rock scene descended from the Dresden Dolls, Jaggery tells stories as much as it performs music. (Read Amelia Mason’s piece on Jaggery for WBUR here.)

The show starts with a half-hour set by Mary Bichner and the double-viola string ensemble, Planetary Quartet – Bichner being another artist mixing classical with pop and whose complex compositions ensure a pretty song, for those paying attention, is never just a pretty song.

“For The Record” is at 8 p.m. Thursday at Oberon, 2 Arrow St., Harvard Square. Tickets are $10 to $12, and advance ticket holders will get a free digital download of the Jaggery album due in mid-July.